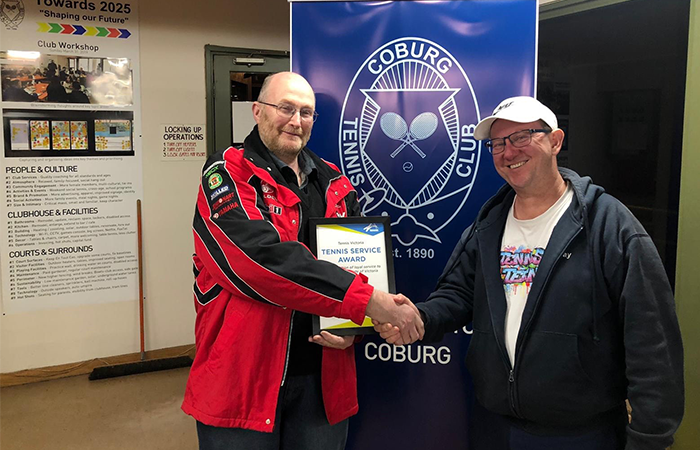 Michael Leeder, Coburg Tennis Club treasurer, has been recognised with a Tennis Service Award after many years of volunteering.

Michael has been involved with the Coburg TC since the mid 90’s after his son, Steven, began playing in the club’s junior program.

“I first got involved with the Coburg Tennis Club around 1997 when my son’s coach who was coaching at Hadfield Tennis Club transferred,” Michael said.

“We transferred with him and from then on I was involved in the juniors and held various positions over the year.”

Countless roles have been filled by Michael over the course of his volunteering, and his impact on the club was felt immediately when he opted to run the junior competition alongside other parents and alleviate Ray Reymers of the sole responsibility.

“Some of my proudest moments would be when I first got involved with the junior teams as chairperson for the junior committee.

“Organising the then Saturday mornings and seeing the children develop their skills on and off the court,” Michael said.

“And to see some still play tennis today.”

Michael started playing himself after a number of years of being around the club, before joining the senior committee in the mid 2000’s- a committee which he has held a number of positions over the last 15 years.

He is the last of a long list of committee members that have come and gone from the club, holding a number of roles including Maintenance Officer, Secretary and Treasurer.

Michael has also been instrumental in a number of larger scale projects at the club.

“(I’m also proud of) major projects like the water tanks, Hot Shots court and the LED lighting on court one and two.

“These go a long way to establishing the club for the future,” Michael explained.

The clubs transition to MyTennis and the installation of Book-A-Court is also testament to the success of Michael over the years.

An electrician by trade, he has been able to save the club money by constantly offering his services free of charge.

“Coburg Tennis Club means to me a place where anybody from juniors to seniors from the community can come along and get involved in tennis on a social and competition level and help the club develop.

“It means a lot to me to be being recognised for a Tennis Service Award as it shows the other volunteers appreciate what I have and will continue to do for the club to develop for the future.

“Without volunteers I don’t think the club would be where it is now.”

Congratulations Michael and thank you for your contribution to Tennis in Victoria.