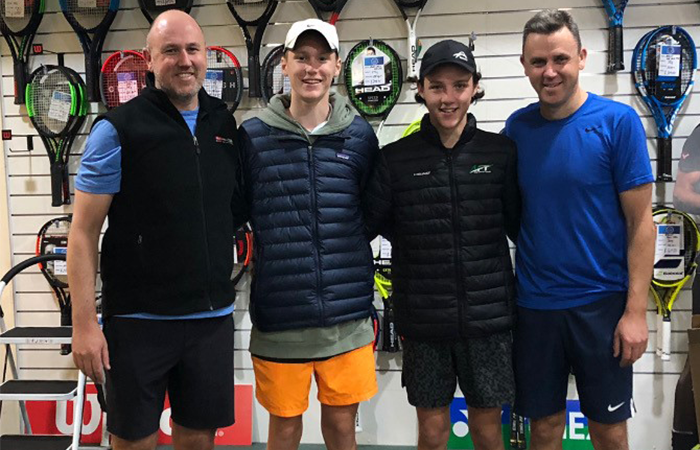 Tennis Victoria Pennant is deeply entrenched in the winter calendar of tennis in metropolitan Melbourne, with its rich history defining the coldest months of the year.

The well-established competition is the largest inter-club competition in Australia, entering its 136th consecutive year this year.

Players of all ages and all abilities partake, attracting a range of people, including those from the same family.

For the Batty family, the opportunity to play in Pennant as two father-son duos was too good to resist.

Adrian and Ashley Batty are brothers who grew up playing at the Geelong Lawn Tennis Club, a place where Ashley, and his son, Austin, still play.

“We had our own tennis court (so I) started playing very young. Maybe five years old,” Ashley explained.

With a dad who ran juniors on Saturday mornings, playing was a must for the brothers, and it was only inevitable their sons went on to play too.

Luke (son of Adrian) and Austin (son of Ashley) are cousins who have had varying experiences playing tennis, but are ultimately enjoying playing with their dads.

“I love the game and enjoy playing with family and friends.

While Austin has been playing since he was five and has progressed from playing in section 15 to section 1, Luke has only been playing for four years.

“I started having some lessons around 12,” Luke said.

“This year is the first time I have played in a competition other than socially.

Playing with your dad isn’t as wonderful as some might make it out to be as Luke explains.

“Dad can’t run, has a dodgy shoulder and injures himself every second week.

That could be a result of a nearly three decade hiatus from the tennis court for Adrian, who is back playing with his son this year.

“I played as a junior in Geelong and ultimately several seasons in Victoria Pennant in the 1980’s but effectively ceased playing once starting work 27 years ago,” Adrian said.

“This year presented an opportunity to field a team with two brothers and two sons.
“(We are doing it) for a bit of fun.”

The brothers are familiar playing with each other, with both of them sharing strong memories of playing Country Week and other local tournaments together.

“We used to play Country Week tennis over the Christmas break as kids.

“Our parents would drive us down and we would set up in the caravan park across the road from the courts,” Adrian explained.

“We probably should have won the tournament more than than we did as we tended to get a little distracted by the social scene each night.”