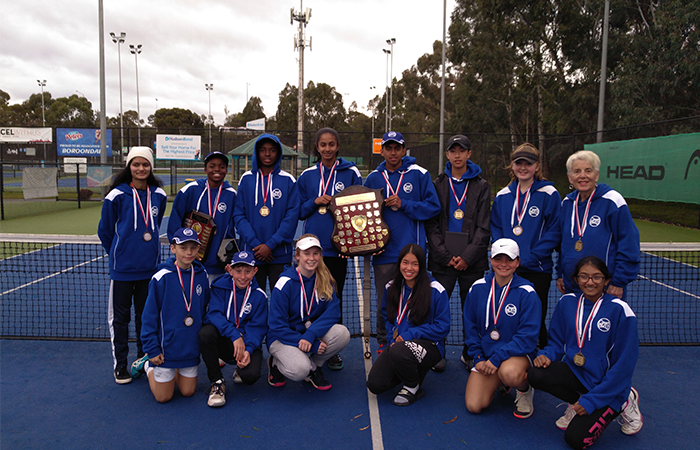 Waverley Tennis (Waverley and District Tennis Association) have taken out the 65th edition of the Pat Pearce Cup on a rain affected weekend at Boroondara Tennis Centre.

The dark clouds and rain delays weren’t enough to stop the WDTA beating out the competing associations for a fifth year running.

While the tournament is typically hosted over the Easter weekend, a lack of available players due to clashing commitments meant that the long standing tradition was broken and was played for the first time ever in July.

“As far as Waverley were concerned we were thrilled (with the win),” Gillen said.

“We have a junior development squad that some of (the players) were in.

“But we did have some good wins. It was quite a convincing win in the end.”

Tournament Director Evan White deemed the tournament a success even with the wild weather.

“(The weekend was) fantastic apart from the weather,” White said.

“Boroondara was a fantastic venue, it was the first time we held it there.

“The facilities are fantastic, it was just the weather that was the issue. We had thunder, rain and hail!”

Fortunately, the synthetic grass drains at Boroondara meant that as much tennis as possible was played in the poor weather.

The change of date was not the only forced change, with team numbers being changed to a total of three players in each age group.

“The standard across all associations is unbelievable,” White said.

“There was some fantastic talent (in the 13/u age group) and the competition was really strong.

“That was probably the highlight of it, seeing the 13/u talent coming through,” he said.

The recurring success of Waverley Tennis was also notable throughout the weekend, especially to Tennis Victoria Associations Leader, Andrew Reynolds.

“The Pat Pearce Cup continues to hold an important place in the world of junior Association tennis opportunity.

“Players keenly seek selection for this event and the chance to enjoy a team environment that includes both male and female is something to value,” Reynolds said.

“Waverley continued their recent hold on the Cup and remain the largest and strongest Association in Metropolitan Melbourne.

“In fact it is Waverley’s turn to host in 2020, the 66th annual event on the same weekend as this year.”

While the Pat Pearce Cup is pivotal in progressing the junior athlete’s singles game, it is one of few underage events that encourages players to play doubles with the opposite gender.

“These association events are always fantastic.

“Because tennis is a very individual sport, when they come into these team events I think a lot of it’s about the kids having a lot of enjoyment.

“Not only playing with and against their peers they run into regularly but also playing with the opposite gender,” White said.

“It’s just that interaction is totally different than what you normally see out there in the tennis world.”