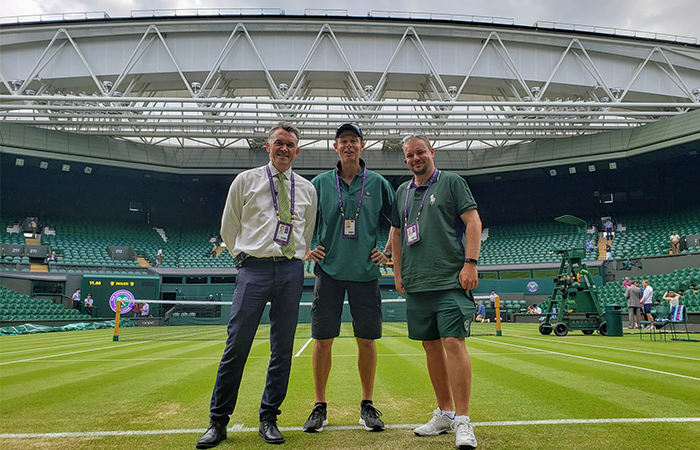 A love of grass courts since childhood has seen Dan Gardner live out his childhood dream of going to Wimbledon – even if it wasn’t as a player.

Dan has returned from a trip of a life time, spending nearly four weeks shadowing and learning off some of the best greens keepers in the world.

His passion for playing combined with his love of turf meant that travelling to the UK to learn as much as he could was a dream come true.

“My father built a grass court in our backyard when I was about five years old,” he said.

“So I guess the seed was planted then.”

Dan’s career in greens keeping extends back many years, and an odd vacation in Perth decided his future.

“After finishing university I realised I didn’t want to live in big cities and needed another plan.”

Dan spent 10 years mastering the Swan Hill tennis courts before a career change in IT beckoned, only to be drawn back to the courts he dominates as a player.

“There were large learning curves swapping between the two which motivated me.

“During my time in IT, the depth of the internet developed and I would learn a lot from online sources like @WimbledonGroundsman on Twitter and golf courses in the US.

“That knowledge would help and inspire the transition out of IT.”

“It was a long process that went down to the wire.

“I was going to a place I didn’t know, and knew no one.

“A lifelong dream was finally going to happen.”

His angst of how he would ever be able to fill in his days at the All England Lawn Tennis & Croquet Club were quickly squashed.

“I ended up spending 10 hours a day at the club, basically talking turf with like-minded people.

“From the top down, all the ground staff there have had amazing turf journeys and something to learn from.”

While Dan could not pinpoint his favourite part of Wimbledon, his awe of the tennis club did not go unfulfilled.

“It seemed every day I would discover something new on the grounds.

“Aorangi was relatable because the courts were set up in banks similar to those at home, but Centre Court demanded respect because of its history.”

“Overall the place is amazing.

“I often found myself smiling just at the thought of being there.”

In between watching games from the best seat in the house – ground level on all the major courts –Dan learnt a plethora of tips he is eager to share with all back home.

“I learnt so much from the way they go about things, it will be good for others to share in that.

Tennis Victoria host a Grass Court Forum annually, and those in attendance will hear about Dan’s experiences first hand.

“(There is) a level of maintenance we don’t see here in tennis much anymore, but I think there is a lot to look forward to, especially if we can keep pushing things forward.
“There are many things I will bring back, but the motivation and inspiration I bring home is immense.

“I love the fact my favourite Grand Slam tournament has invested in grass courts and will ‘protect and enhance grass court tennis and to grow it internationally’.

The Wimbledon motto, ‘in pursuit of greatness’, has left Dan with the urge to continue working to be better.

“If you think you can’t improve, it is time to give it away.

“I have been reminded several times that there are no excuses now.”

Dan embarked on his journey with a particular interest in learning about metrics and benchmarking – which is a measureable approach to continue working against.

“Although they prepare courts very differently from us, it will be exciting in the future to compare our surfaces in terms of data,” he said.

Since returning to the green courts made famous by Tennis Victoria’s Country Week, Dan was able to use his connections to make the trip possible. While the trip was mainly self-funded, there are many people he thanked in making the trip possible.

“Neil Stubley, Head of Courts and Horticulture at Wimbledon, with his first invitation and then the hospitality of both himself and his team.

“The Tennis Victoria Places to Play team, led by Ken Barton, for their direction, passion and investment in grass court tennis.

“And as always, all the friends and family of the Swan Hill Lawn Tennis and Croquet Club for their amazing support and inspiration throughout the years.”

Before we know it, Dan’s courts could surpass those at Wimbledon, and the tiny town of Swan Hill could be the envy of the English Grand Slam in future years.

Click here for more images from Dan’s trip of a lifetime.