David McNamara recognised for his service to Tennis 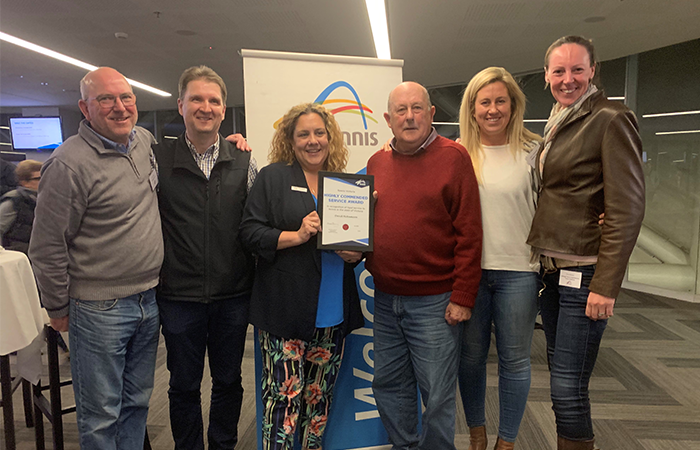 David McNamara has been awarded with a Highly Commended Service Award, which recognises outstanding service to the sport of tennis in Victoria.

David was acknowledged in front of a full house at AAMI Park during the the Victorian Community Tennis Forum #15.

The theme of the night was exploring the relationship between Club and Coach – an extremely fitting setting as David has long been associated with both coaching and club related roles.

“Obviously this was organised through Oakleigh Tennis Club,” David said.

“Which I really do appreciate. It has come as a complete surprise.

“I couldn’t understand why I had to come tonight,” he chuckled.

David has been coaching and performing different roles at a number of clubs for almost 50 years.
His roles have varied throughout his time, including being a Head Coach, Junior Convenor and Vice President. He has run open days, working bees, school & holiday clinics, club tournaments, weekend competitions as well as weekly group and private coaching lessons. Clearly, there is nothing David hasn’t done!

However, for the past couple of decades, David has strongly been affiliated with the Oakleigh Tennis Club.

Back in 1993, the club was in dire straits and the 114 year history was in danger of ending.

He took on the task of rebuilding Oakleigh Tennis Club at a time when there was no coach, no members playing competition and no active juniors. Within a few short years, David brought life and excitement back to the club.

Junior tennis was on the rise, men & women’s Pennant teams were created, mid-week ladies coaching classes formed as well as coaching for adults and juniors.

Oakleigh Tennis Club soon became a powerhouse within juniors in particular, of whom many went on to play tennis at national & international level.

This was no doubt due to David’s passion for tennis and the positive and inclusive environment he created for all.

“Oakleigh Tennis Club over the last 25 years has been a big part of me and I really appreciate Donald Smith and Peter Splatt for putting me up for this award and thank you all very much,” David said.

Congratulations David and thank you for your contribution to Tennis in Victoria.