Frank Sedgman named Officer of the Order of Australia 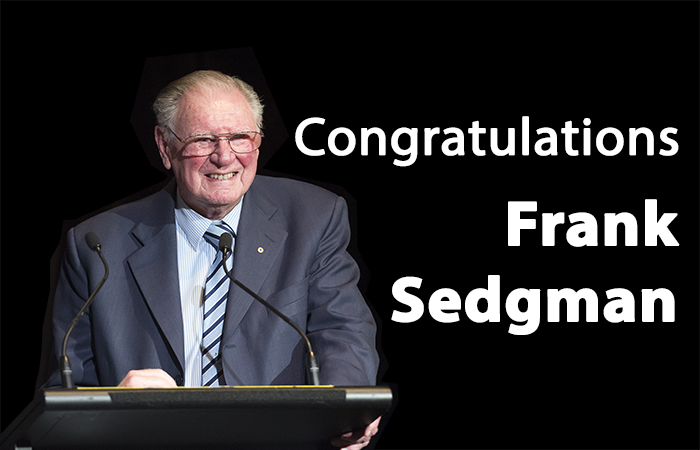 Frank Sedgman, the man who started the greatest era of Australian tennis, has been recognised in the Queen’s Birthday Honours List, elevated to the rank of Officer in the General Division of the Order of Australia.

Sedgman, aged 91, has been honoured for distinguished service to tennis as a player at the national and international level and as a role model for young sportspersons.

In typically humble fashion Sedgman was surprised by the honour.

“At my age, I can’t believe it. I don’t even play tennis anymore,” Sedgman said. “I don’t even know who put me up for it but this is a great honour and I am so proud.”

The honour acknowledges a brilliant career during which he was Wimbledon and Davis Cup Champion, pioneer of the professional circuit, a mentor and a coach who set a standard for behaviour on and off the court.

At his peak in 1951-52 he won 16 major titles including (with Ken McGregor) seven consecutive grand slam doubles titles.

“Frank had the courage to turn pro at a time when the tennis establishment valued only amateur participation at the elite level, and he was shunned from both Davis Cup and Grand Slam competition for doing so.

“His actions, and that of his fellow ‘barnstormers’, paved the way, and created a viable career option, for the players of today. I’m delighted he’s been recognised with this honour.”

Sedgman grew up in Melbourne during the Depression and honed his skills by hitting a ball for hours against the factory wall where his father worked.

It was his partnership with coach Harry Hopman after the Second World War that started a golden age for the sport.

Hopman urged the Victorian to build his fitness levels so he could match the strength of the so-called ‘power game’ of serve and volley played by the Americans.

In 1950 Sedgman led Australia to a Davis Cup victory and with McGregor defended the title the following two years.

“He was our idol and he showed us how to play and how to behave,” said Neale Fraser.

Sedgman did more than inspire others – he pioneered a professional career for them by signing a contract to play exhibitions against Jack Kramer in 1953.

The exhibitions were so popular it encouraged Kramer to expand the circuit and eventually turned the sport into the multi-million career opportunity players enjoy today.

Kramer said he believed Sedgman’s speed and all-round play would have troubled Roger Federer. “It would be wonderful to watch,” he mused.

After retiring, Sedgman operated a gym in Melbourne where he coached Roy Emerson and Margaret Court who became the most successful amateur players of the 1960s.

Ever the humble champion, Sedgman once reflected that his greatest pride was “the way we won the Davis Cup and represented our country.