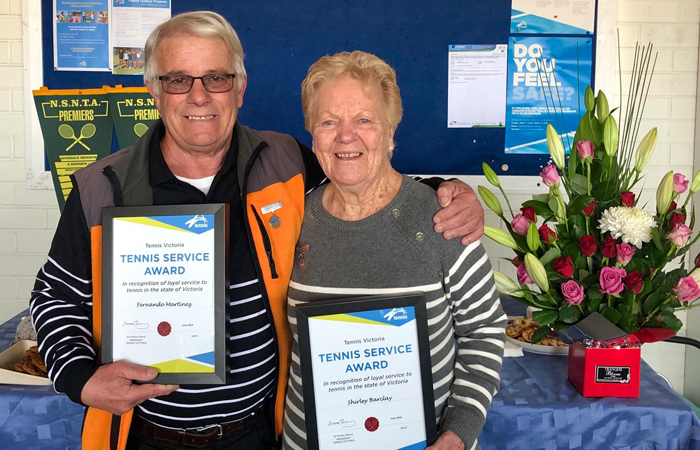 Two star volunteers from the Avondale Heights Tennis Club have recently been acknowledged for their wonderful service to the club.

Shirley Barclay and Fernando Martinez were presented with Tennis Service Awards in front of a full club house of appreciative members.

The pair have collectively notched up 70+ years of service, which is simply astounding.

Barclay and Martinez have both held numerous positions within the club but currently hold vice president and treasurer respectively.

Barclay’s journey began in 1976 playing in the mid-week ladies competition. With her children being coached at the time, she offered her assistance as junior delegate and unselfishly continued that position even after their junior years.

She was appointed secretary in 1998 – and to this day remains in that position. Her efficiency is exemplified by her organisational skills. From key master to club official at Council meetings, Barclay is always happy to do whatever the club requires.

This dedication resulted in deserved life membership with the club.

Martinez’s journey began in a similar way to Barclay’s in that the children’s tennis involvement was the catalyst to them lending a hand.

In 1987, he was appointed vice president of the club and has been such an integral part of the community. No job is too big or too small for Martinez. He has been involved in many maintenance requests and been extremely important in organising courts for competitions.

He has shown tremendous commitment to the club, and both he and Barclay should feel proud of what they have achieved.