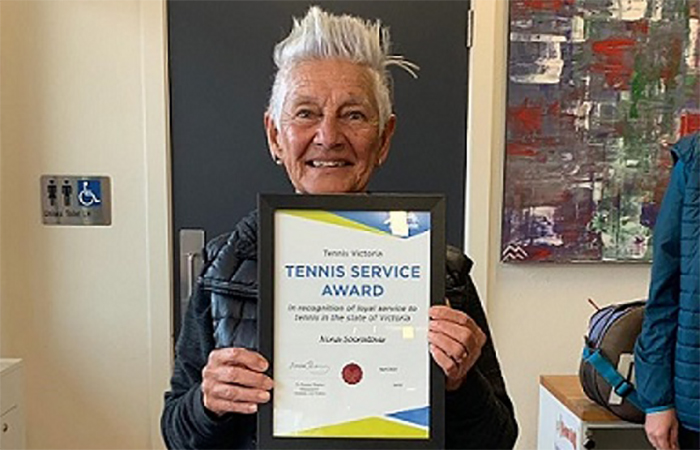 Nina joined the Doncaster Tennis Club on the 24th of September 1985 and has been a member ever since. Nina has held different roles over her time with the club.

Nina was again elected as Mid-Week Ladies President in 2014 where she took the role of – you guessed it – House & Grounds Coordinator! Nina currently continues to hold both of these positions where her outstanding contribution, especially in the House and Grounds role includes meeting tradesmen throughout the day, keeping a vigilant eye on the myriad of jobs that need to be attended to as well as maintaining regular communication with Manningham Council. Nina also took a proactive role in 2016 during the clubhouse renovations.

In addition to Nina’s various Committee roles, Nina has competed in the Mid-Week Ladies Competition for many years (three competitions per week at present) and has played Saturday afternoon competition, Pennant and Night Tennis.

Nina was instrumental in getting a young Mother’s Group to have coaching and social play, with the view to play competition. Nina is constantly recruiting players into Night Tennis and her enthusiasm has paid off with 9 teams currently playing.

Nina has been active in coordinating and organising the Tennis Seniors Tournament hosted by Doncaster Tennis Club since 2013. Such organisation includes advertising, organising entries, grouping participants in appropriate grades as well as arranging catering. Nina has done such an outstanding job that the previous record number of entries (60+) has been broken the last two years, with 70+ people taking part.

Nina has always supported or coordinated social events at Doncaster Tennis Club that include trivia nights, round robin social nights, break up nights as well as many other social and fundraising activities.

In 2016, Doncaster Tennis Club awarded Nina with a Life Membership in recognition of her immense contribution the Club. Nina’s powers of persuasion are legendary throughout the club and her ability to ‘get things done’ is an inspiration to all members of the community. Nina is always on the lookout for improvements that can be made and will always be promoting Doncaster Tennis Club at any opportunity that arises.

Congratulations Nina and thank you for your contribution to Tennis in Victoria.