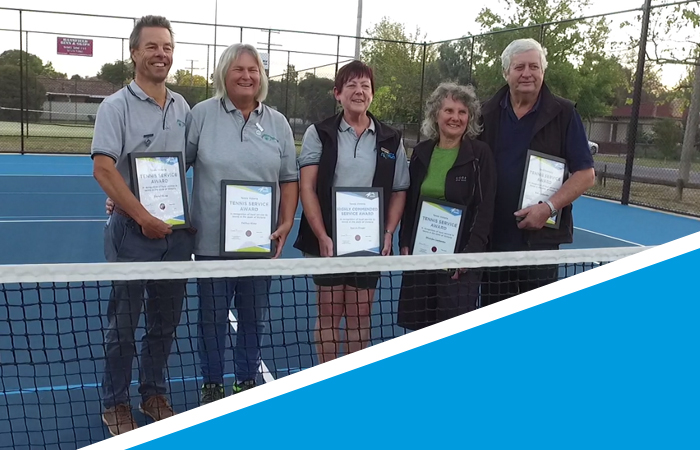 Tennis Victoria has formally acknowledged five volunteers from the Mansfield Tennis Association during a presentation on Tuesday 2 April, where their newly constructed All-ages Developmental Area was officially opened.

Part of the Tennis Victoria Recognition Program, these awards recognise people who have demonstrated their contribution to the sport through devoted and significant service to any one or more of Tennis Victoria ‘s affiliated tennis clubs and/or associations and/or member organisations.

Rhonda and Bob Carpenter were pleasantly surprised with the awards and believe a simple love for the sport is the catalyst to a strong attachment to the community.

“I think everyone in the club deserves an award because everyone puts in … if you persist then anything can happen,” Bob Carpenter said.

“You do it because you want to,” Rhonda Carpenter said.

Debbie and David Mims have also made a significant contribution and are always keen to lend a hand.

“I was actually very flattered … it’s lovely to be recognised but also a little embarrassing,” Debbie Mims said.

“[Mansfield Tennis Association] made you feel very welcome, they’re lovely people and it was a nice way to come into a new town,” David Mims said.

Karyn Fraser was presented with a Highly Commended Service award, which is only awarded to up to 10 people a year. She has been pivotal to the recent construction of their All-ages Developmental Area.

When asked about the unveiling of the new facility, Fraser was quick to divert to the many others within the community that helped out.

“It’s been the faith of everyone, yes I may have been the head person, but I had the backing from everybody else,” she said.

The Mansfield Tennis Association’s new court and hitting wall is set to welcome even more players and actively engage the community to pick up a racquet.