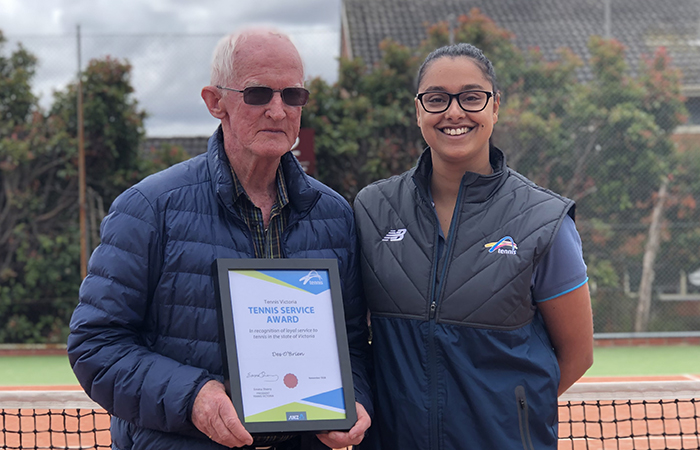 Des O’Brien has been a Committee Member of St John’s Catholic Tennis Club (SJCTC) for 35 years. On Sunday 25 November 2018, Des was awarded a Tennis Service Award for his outstanding contribution to the club. On the same day, the SJCTC was celebrating the Steven Smith Friendship Cup, named in memory of former committee and club member, Steven Smith who passed away two years ago, almost to the day.

The love of club and community was evident on the day with many people participating in the competition, enjoying a meal with friends in the club house and being there to honour Steven’s memory and Des’ contribution to the club.

Des first became involved with the SJCTC in the early 1980’s when his late wife, Maureen, showed an interest in playing tennis and their sons commenced being coached at the club. It was not long after that Des first became a Committee Member in 1983, and after only one year on the Committee, Des was nominated and elected as President, a role that he held from 1984 – 1987. He also had another Presidency stint from 2000 – 2014. In 2014 he was elected to the Junior Secretary role which lead to Secretary from 2015 to 2016, and Treasurer from 2016 to 2017.

Des has the wonderful capacity of being able to lead as well as roll up his sleeves and help out at a working bee. He has been instrumental in linking the Parish and Tennis Club for many years on various Parish Church Committees and Boards. Des has also been involved in the court resurfacing project and ongoing maintenance. With his ongoing enthusiasm and passion, Des was also the driving force behind SJCTC new logo and uniform design which he hopes the community will wear with pride.

To assist in introducing juniors to tennis, Des has worked with many staff at three local Primary Schools and has helped introduce club sponsored free clinics for local beginner kids in Summer and Spring. This has also encouraged adults to join in social, coaching or competitive tennis at SJCTC. Des has an understanding of players of all ages and this is evident in his continual and extensive involvement in the running of our Junior and Adult Club Championships.

Des enriches the community by encouraging and supporting children of all abilities to pursue the sport of tennis. Des organises weekly, supervised practices for them after school and these sessions are well attended by the community. The time and effort he gives is inmeasurable.

Des’ continued passion and commitment as a volunteer for over 35 years has meant the club and local community enjoys thriving input and inspiration to all. Everywhere you go there is a strong chance that people will know Des O’Brien from St John’s.

Upon accepting his award, Des was sure to emphasise that it is more than one person that makes the club, and he thanked many different people that he’d had the pleasure of working with. Particularly Chris George and Ange Jackson who he honoured for their leadership. “This is very significant, that might be an understatement really. Right along the way, it’s been the support from everyone. Running a tennis club doesn’t just happen. Thank you all very much.”

Congratulations Des and thank you for your contribution to Tennis in Victoria. 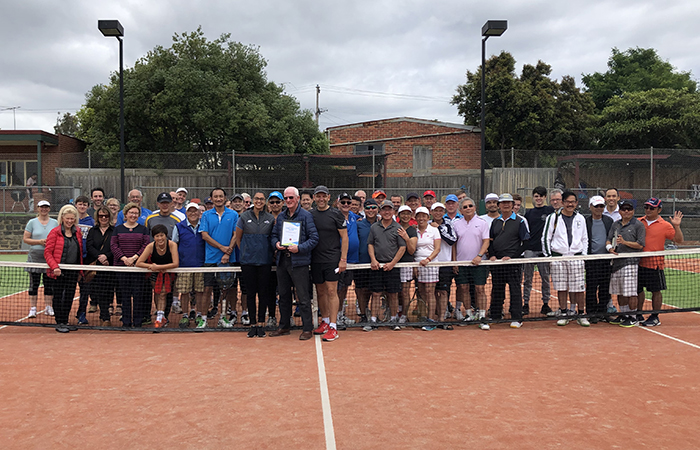