1970 – A Pivotal Year for Canberra Tennis 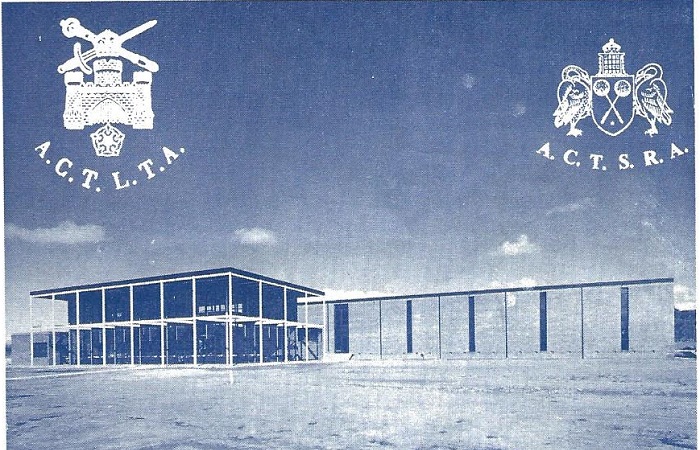 50 years ago Canberra was in the midst of boom years, reaching a population of some 137,000 and with a growth rate exceeding 10% p.a. Tuggeranong was still three years away, however, the new ‘towns’ of Woden, six years old and Belconnen, three years old, were rapidly taking shape (UBD Map).

The Bicentennial year of the arrival of Captain James Cook on Australian shores was celebrated on Anzac Day by the Queen and Prince Phillip’s opening of the Captain Cook Fountain/Memorial Jet and the globe of Cook’s voyages, on the shores of Lake Burley Griffin. They also opened the Carillon the following day.

Australian tennis was still enjoying its golden era; Rod Laver having won his second Grand Slam in 1969, the first full year of ‘Open’ tennis and Margaret Court winning her Grand Slam in 1970. 1970 was also a year of turmoil and change in world tennis with the men’s professional organisations merging and boycotting the Australian and French Opens’, calling for more prize money.

In the women’s tennis the so-named ‘Original Nine’ took a stand against the pay disparity between men and women tennis professionals by signing up to the Virginia Slims circuit. The two Australian women signatories Kerry Reid (Melville) and Judy Dalton (Tegart) were suspended by the ITF, missing the ensuing Grand Slams.

But what of the changing tennis landscape in Canberra in 1970? Most significantly the headquarters of tennis in Canberra moved from Manuka to Lyneham, with the opening of the National Tennis and Squash Centre (NTSC) on 12 September 1970, by the Patron of the ACTLTA Sir John Overall. First conceived in the early 1950’s the move was championed by two of the most influential members of the Canberra tennis community, Charlie Boag and Ken Willis.

It was also in 1970 that a Veteran’s Tennis Committee was formed under the leadership of Bob Thornton. The Committee proved so successful that it became a Branch of the ACTLTA and subsequently negotiated the ACT hosting the National Veterans (Seniors) Championships in Canberra for the three years (1971 – 1973). Tennis for seniors was on the map, popular and here to stay.

In the same year Charlie Hollis arrived in Canberra. He was the nationally renowned coach of Rod Laver, Fred Stolle, Mal Anderson and Roy Emerson amongst others and in the words of Laver, ‘if our paths hadn’t crossed I may never have become an elite tennis player’. Charlie subsequently took up the position of Resident Coach of the NTSC, giving a dramatic boost to the growth and quality of local junior tennis, most notably Wally Masur.

In 1970 the new tennis club of Belconnen (later BelWests) was formed across from the Jamieson Centre, opened in the same year by the Minister for the Interior, Peter Nixon. Belconnen was the first of an ongoing growth in clubs  through the 70s. By 1979, Hawker (Larkham Tennis Centre), Kambah, Melba, Southlands, Torrens and Weston Creek had also affiliated, with Kaleen and Kippax under construction. Registrations were up by over 60%.

To test your memory and/or knowledge of Canberra tennis in the vibrant and pivotal year of 1970, here is a Quiz (with answers to be provided next month).

Q1. The photo leading this article shows the new National Tennis and Squash Centre in 1970. How many tennis courts and of what surfaces were in the initial complex?

Q2. What was the largest club of the eighteen affiliated clubs (registered players) in 1970?

Q3. Which club was the most successful in adult pennants in 1970?

Q5. What were the first tennis Championships held at the new National Tennis and Squash Centre over the October long weekend in 1970, with a record number of entries of 537?

Q6. What was granted in 1970 (following an appeal to the Supreme Court) which helped get the NTSC off to a sound financial start?

Q7. Who was the top ranked ACT girl player and Junior Girls Singles Champion in 1970 (she is now an Australian Seniors Representative)?

Q8. Who was awarded Life Membership of the ACTLTA at the AGM in December,1970?

Q9. Who was the top ranked ACT women’s player in 1970 – winning the ACT Resident Women’s Singles and Doubles (with Alison Ide) and the ACT Open Mixed Doubles (with Geoff Pollard)?

Q10. What are the two famous family names, synonymous with tennis in the local region from the late 1880s, building and living in the ‘old’ Canberra Inn on the old Yass Road, (across from the NTSC) up until 1974?

Q12. Who were the NTSC architects, one a foundation member of the Centre, who Ken Willis said ‘saved the Association a small fortune by providing their professional services for free‘?

Q13. The opening of the NTSC on 12 September,1970 included five Australian tennis ‘Stars of Yesteryear’. Who were they?

Q14. What was the name of the Shield presented to the winning boys team in the A1 Junior Pennant Competition, and which team won the Shield in 1970?

Q15. What innovation was introduced in Australia by Slazenger in 1970, but not adopted in Canberra for official competition, until 1971?