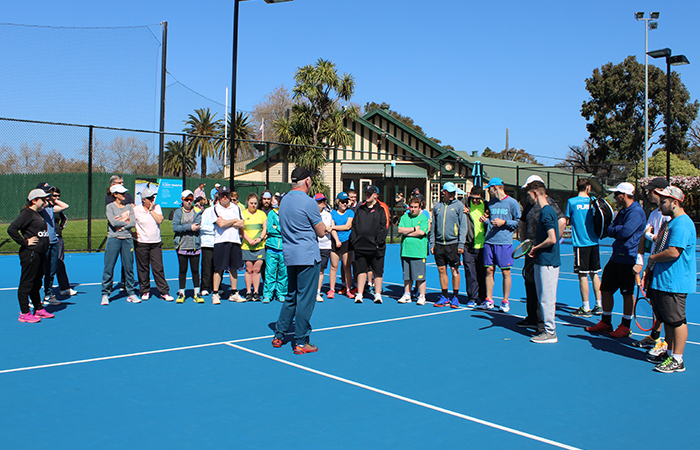 The two day event saw players from around Australia descend on Albert Reserve Tennis World, competing across a number of categories in Singles and Doubles events.

The sunny skies which graced the courts on Saturday didn’t last long, with rain causing delays Sunday morning. Further rain led to abandoned play in the afternoon with incomplete results in the Women’s II-1 Doubles round robin and the Men’s II-1 Doubles Final not being played.

Tennis Victoria Tournaments and Events Administrator, Lita Trimmings, was pleased with the quality of tennis on display and the success of the weekend.

“For those who haven’t witnessed a PWII event, you would be amazed at the level the players compete at,” Trimmings said.

“They are all amazing individuals who come from around Australia to play.

“For some it was their first time competing, and for others it’s nice for them to catch up with their friends they have made along the way through tennis.

“Everyone is so supportive of each other. That’s the biggest thing I take away from it.

“Win or lose, all the competitors and families encourage everyone. It’s always pleasing to see.”

Fortunately, the weather didn’t deter the spirit of the players.

“Even though some of the games were abandoned on Sunday afternoon, the players enjoyed the tournament regardless,” Trimmings said.

“Kelly and Carla in particular were extremely patient, with their match being interrupted by a rain delay.

“That didn’t stop them though. With both girls competing with smiles until the end.”

Tennis Victoria would like to thank the players and families for participating in the event, particularly those who travelled to Melbourne from interstate. Special mentions to Tony Warland (Tournament Referee), Michael Rodda (Sports Trainer) and the on court officials who helped throughout the weekend.