Luke Sampson and Marcel Pietrasik recognised for service to Tennis 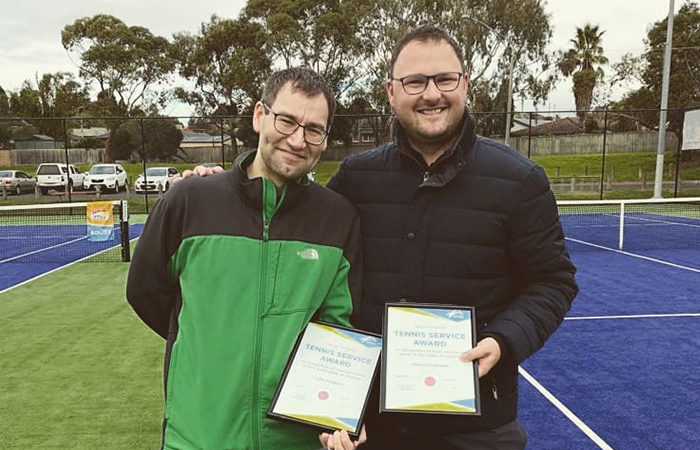 Luke Sampson (L) and Marcel Pietrasik (R) have been integral parts of the Rosswood Tennis Club in recent years and have been recognised with a Tennis Service Award.

Luke has been involved in the Rosswood Tennis Club since a young age, representing Rosswood from juniors through to seniors.

He has served as treasurer for the tennis club for over 15 years, and has contributed to accounting and secretary roles in multiple years too. Luke has played a part in a number of fundraisers, lending a hand to events such as Open Days, Bunning’s BBQ’s and local council festivals.

Luke is passionate, thoughtful and simply a lover of all things tennis. These days you can find him grinding out some ground strokes at Thursday Night Cardio at the club he loves most.

Marcel is equally as passionate, and has served as President of Rosswood Tennis Club for the past six years.

Marcel – along with Luke – often attends as many council sponsored festivals helping out where he can. Back at the club no job is too tedious for him where he is seen weeding, painting, fixing locks and so much more.

He helped Rosswood with a national title for Best Open Day in 2014 and more recently has assisted the club gain a grant for court upgrades.

Congratulations to both men who dedicate their time to a club which continues to grow and will be a ‘club to watch’ in the near future.

Thank you for your contribution to Tennis in Victoria.