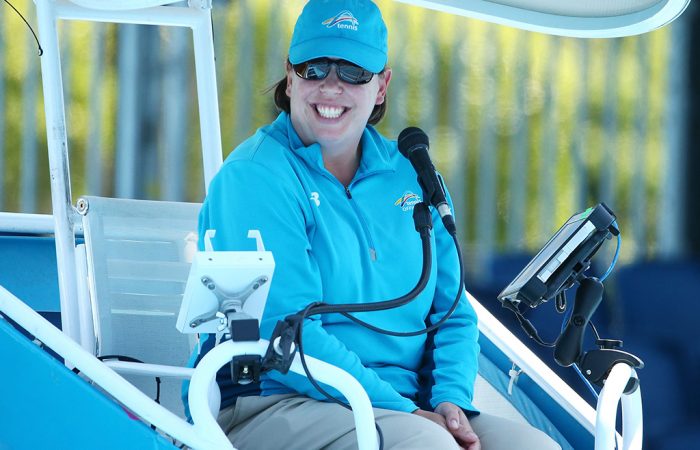 We sit down with Emma to talk through her officiating journey.

When did you first start officiating?

My first tennis officiating experience was at 2002 Canberra International held at the Canberra Tennis Centre. My sister and I came along, got some basic training as line umpires and were out on court with some of the best players in the world! I loved the passion from my colleagues and just how these fun, amazing, down to earth people were performing at the highest level. The people are what caught my interest in this being a very fun and interesting challenge – and something so different to my everyday life.

What have been some of your biggest achievements so far?

I have been so fortunate to be part of some of the biggest tournaments in the world, including Grand Slams and most recently the Tokyo Olympics. I have been lucky to be part of Grand Slam Finals as line umpire, review official and chair umpire, and was proud to be part of a majority female line umpire team at Fed Cup Finals (Australia v France) Perth 2019.

How many Grand Slams have you ranked up?

What does Life Membership mean to you?

It was really special to be nominated by colleagues who I greatly respect and to be recognised for not just my officiating achievements, but the contribution to coordinating, supporting, training and mentoring ACT officials, as part of Tennis Officials Australia before transitioned to Tennis Australia coordination means so much. I would not have achieved what I have without the support of the many great ACT officials, and the people who worked here, who came before me – who not only provided amazing support and camaraderie, but also role modelled what it meant to be part of a broader team to contribute to the successful running of a tournament.

What is one piece of advice you would give to anyone keen to start their umpiring journey?

The best advice I can offer anyone keen to start officiating would be – remember why you are doing it. Whatever the reason – weather love for the sport, wanting to contribute back, enjoying the people, looking for a way to be involved within your local community, travel – remembering the reason why you love something is the best way to stay inspired and engaged. And I would also add – there is no one path to be an official – you can ask 10 different people and you will get 10 different stories – the best way is finding your own path, not comparing to others and find the people who can support and challenge.

We are very proud to call Emma Canberran, and we wish her all the very best for the future!