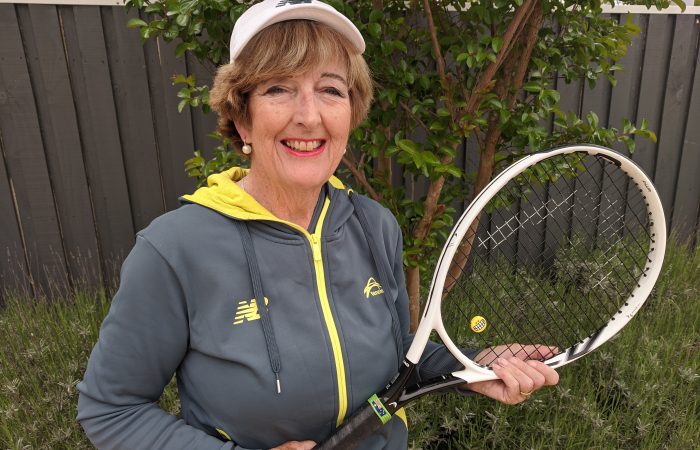 Tonight, Canberran Sue Willis was awarded the highest accolade in tennis at the 2021 Australian Tennis Awards, the Newcombe Medal.

Sue took home the prestigious award in the Most Outstanding Tennis Senior 30+ category. This award recognises involvement in 30+ seniors tennis as a player, administrator or both. The key criteria includes raising the public profile of 30+ seniors tennis through demonstrated excellence in playing performance or administration, and demonstrated behaviours that exhibit a high level of integrity.

Tennis ACT CEO Kim Kachel is thrilled with the announcement, “Sue truly embodies what tennis is all about and displays our values to the highest level.  Sue has been an active committee member at the Reid Tennis Club for the past decade, is heavily involved in the Tennis Seniors ACT committee, and has an extremely impressive playing record, including representing the ACT team at the Australian Seniors Team Carnival in 2018, 2019 and 2020.  She has also gone on to represent Australia in the Super Seniors World Team Championships in Umag, Croatia. You will often catch Sue at her local club encouraging and mentoring players of all ages and abilities.   We have a thriving seniors tennis community in the ACT and region and Sue is a critical part of that and a great role model for the broader community”.

Sue joins fellow Canberran’s who have also won this award including Pat Maloney (2019) and Ros Balodis (2017).

The 2021 Australian Tennis Awards celebrated the achievements of Australia’s tennis community across 13 award categories with tennis clubs, volunteers, officials, coaches, schools and talented junior players all recognised for their outstanding achievements and contributions to tennis throughout the year. The event was live streamed online through Tennis Australia.

The ACT had three finalists including;