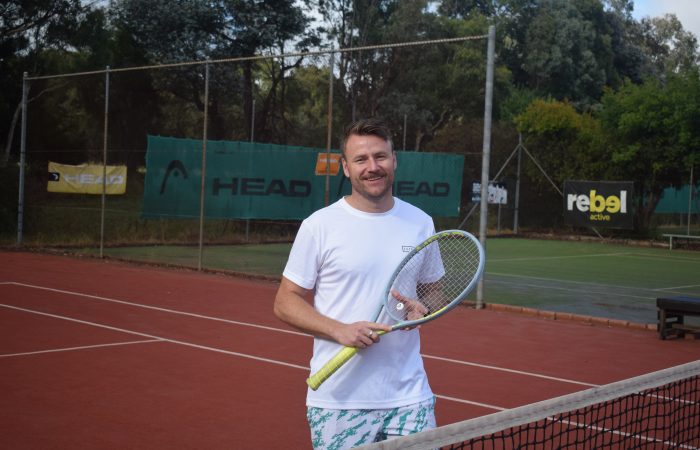 Sam’s tennis journey started at the ripe age of seven years, in the regional town of Young NSW, taking up the sport with local coach Colin Maher. His tennis included weekly training sessions, and travelling across the Riverina and South West Slopes to compete in junior competitions.

Once he relocated to Canberra for high school and university, the game slowly phased out due to a range of other sports he competed in.

Two decades on, Sam tells us how he returned to the game, “during the COVID-19 lockdown, once restrictions started to ease my 6-year-old son Harvey transferred to private sessions at Melba Tennis Club. Due to restrictions parents weren’t able to access the club, so I resorted to taking my racquet and hitting a ball against the toilet block while I waited”.

“After a couple of weeks Harvey’s coach, Sandy asked me if I’d like to jump on the court for a hit after his session. Her persistence paid off, and I started doing weekly one-on-one sessions, and eventually added a squad session on Tuesday nights with Owen from On the Line Tennis. I then tried my hand at being a reserve for the Red Hill Roos for the Spring Canberra Tennis League. Again, the support and encouragement from Carolyn Paris the Team Capitan, made the experience very enjoyable”.

Sam said the club environment, and coaching staff makes it the ideal community hub, “Melba Tennis Club provides such a welcoming atmosphere. There is a great mix of people involved, and programs to suit all ages and abilities. The coaching team really enjoy what they do, which makes smiling infectious”.

“The way that On the Line Tennis has really integrated their whole business model into the success of the club helps makes Melba such a great club to be involved with. The club is always on the lookout for new ways to innovate including putting their hand up to be pioneers of new initiatives like the Tennis 4 Teens program, but at the same time manage to genuinely hold on to what makes tennis great in the first place”.

This week a record of 84 teams will take to the court to represent their club in the Summer Canberra Tennis League, and Sam is excited to give it a go “the Canberra Tennis League is a great way to be involved in the game. I get to play with some great team mates; Sandy, Emily and Adam and we are ready to have some fun and not take it too seriously”.

The Walking Clinic Canberra Tennis League starts this week at various clubs across. Entries are now open for the Autumn Competition, which gets underway 1 March.