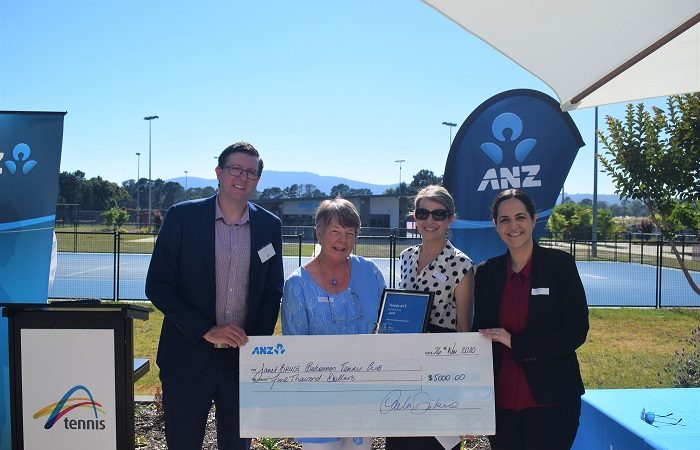 Today Tennis ACT hosted the Volunteer Function, an event that recognises and celebrates the fantastic work our volunteers do across the ACT and region.

Tennis ACT Kim Kachel said the event was a celebration of dedication, commitment and community spirit,  “2020 has been a year like no other. Faced with unprecedented adversity, and various challenges, the tennis community in the ACT and region rallied together and showed its incredible resilience and adaptability”.

Thanks to ANZ the winner received $5000 to their local tennis club, this can be used towards club improvements including; clubhouse upgrades, maintenance, equipment, uniforms and much more.

The winner of the 2020 Volunteer Achievement Award was Janet Bruce from Belconnen Tennis Club.

Janet has been a key figure in the development of Belconnen Tennis Club, and continues to champion positive change for the benefit of the broader community and the sport of tennis.

There is no role that Janet can’t do including social media, marketing, maintenance, club history, fundraising campaigns, grant applications, sponsorship and is a huge advocate for diversity inclusion and women in sport.

On top of that Janet held the Club President position for a total of 7 years. During her president role, she achieved club facilities upgrades including the gazebo, BBQ, landscaped area, PVC fencing of courts, a new hitting wall and the clubhouse kitchen renovated.

Janet’s approach to think outside the box is outstanding, and a perfect example of this was developing the ‘1 court 1 hour’ social tennis sessions. These sessions were developed after the lockdown period and is targeted towards those women with changed work conditions, such as working from home or part-time.

This year, she organised spring cleaning of the clubhouse, re-oiled the gazebo, and during the COVID lockdown and volunteered with another member, to take the opportunity to repaint the benches and seating.

Janet was instrumental in developing the Women’s Tennis Network into the clubs tri-weekly social tennis sessions. While successful in terms of numbers, the sessions became increasingly dominated by men. Women, being fewer in number and a low return rate for women participants.

Since its inception in 2018, 79 women from a diverse range of ages, cultural backgrounds and locations have participated in women’s social tennis through the Women’s Tennis Network. From one court initially, four courts are now regularly needed.  It has attracted women who otherwise would have not been engaged, or tried out tennis.

Many participants provided glowing testimonials, saying if it wasn’t for Janet they wouldn’t of got on court. Her motivation, enthusiasm and friendship has helped them play in a supportive and friendly environment.

A big congratulations to all finalists;