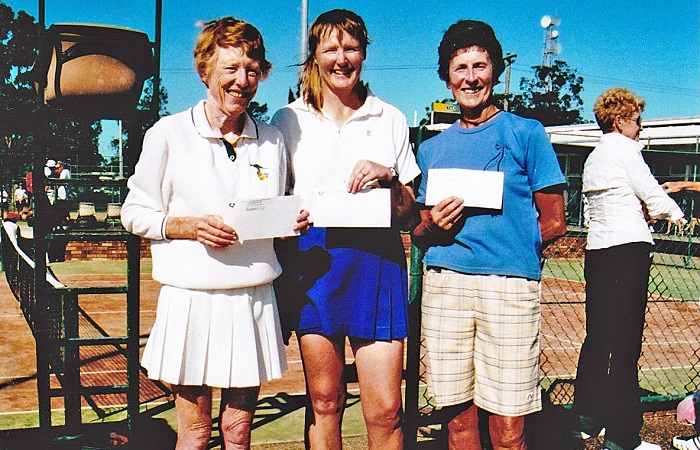 The year 2020 has been challenging for everyone but it has provided an opportunity for reflection and reminiscing. This is particularly true for the tennis seniors community, who in 2020 celebrate the fifty year milestone of the establishment of Seniors (Veterans) tennis in Canberra. In 1970 the ACT became the first State/Territory jurisdiction to establish a local seniors tennis association.

In both the June and September 2020 issues of VETSET details of the wonderful and often colourful history of seniors tennis in Canberra are spelt out.

From humble beginnings seniors tennis has grown immensely as a “sport for life” – both socially and competitively. All clubs in Canberra and surrounds have their “senior” players. They are often the lifeblood and stalwarts of their clubs. They are also often associated with local families who go back for generations.

Seniors competitions are organised through Tennis Seniors ACT and as veteran John Greenup has said, ‘the ACT Vets have punched well above their weight in national and international competitions’.

The first ACT player to win an Australian Seniors title was Cres Roberts, Australian 45+ Seniors grasscourt champion in 1974. His notable win was achieved on the natural grasscourts installed at the new headquarters of ACT tennis at Lyneham. The first teams success for the ACT was in 1976 when Harry Gibbs, Paul Metzler, Charles Boag and Arthur Ide won the Australian 55+ event held in Canberra. Jean Boag, Josie Buchtmann, Jean Manning and Norma Crawley became the first ACT ladies to win an Australian team title, 50+ in Hobart in 1977.

Josie and Jean followed up in 1979 by winning the 55+ Australasian (as it then was) Seniors Ladies Doubles, held in Christchurch, New Zealand.

The first ACT representative in an Australian Seniors team competing at the ITF organised World Seniors Championships was Charles Boag (Tennis ACT Walk of Fame recipient 2018). He competed at the 1982 60+ Brittania Cup held in Kiamesha Lake, New York. Charles was followed by Pat McNicol in 1983 representing Australia in the 40+ Young Cup, held in Cervia, Italy.

Since then fourteen males and nine women have gone from playing for the ACT in Australian Seniors Tennis Championships to represent Australia on the international stage in teams or individual events. In all, nine have tasted the success of being crowned a World Champion. For a small jurisdiction it is a remarkable achievement.

So, who are our nine World Tennis Champions?

First to win a World Seniors Title was Kay Schiavinto (nee Blundell) in 1990. Winning the Australian 50+ Ladies Singles and runner-up in the Doubles, Kay was selected in the Australian Bueno Cup team. The team achieved success in Barcelona, Spain to become the first ever winning Australian team in an ITF Womens World Teams competition. Kay then went on to win the 50+ World Doubles title and was runner-up in the Singles.

Our second World Seniors Champion was Brian Hurley who Ken Willis once said, “was probably the most successful and durable male in ACT veterans tennis”. In 1995 Brian was runner-up in the Australian team competing in the 70+ Crawford Cup. In the same year he won the World Mens 70+ Doubles title, with Queenslander Neale Hooke. Brian and Neale paired again in 2000 in South Africa to win the 75+ World Doubles title and in 2002 Brian was a member of the Australian winning 75+ Bitsy Cup team.

The third player to win a World Seniors Championship was Ros Balodis who in 1998, in her first year in seniors tennis, won the individual World 40+ Singles title and Doubles title, with Kay Nealon. It was the start of a remarkable seniors tennis career which continues today. Since 1998 Ros has remained undefeated in Australian singles championships and amassed 58 Australian titles in singles, doubles, mixed and team competitions. On the International stage she has won seven World Singles Championships, twelve Doubles, one Mixed and seven Team Titles; a total of Twenty Seven World Seniors Titles. In 2017 Ros was inducted into the Tennis ACT Walk of Fame and in 2020 achieved Legend status in the Australian Seniors Tennis Hall of Fame. A Legend indeed!

Most Canberrans of more mature years and certainly “Queanbeyanites” have heard of Heather McKay (nee Blundell). Her achievements, particularly in squash, but also in hockey and racquetball, have seen her ranked in the top five greatest Australian athletes of all-time and in 2000 recognised as a Legend in the Australian Sports Hall of Fame.

Heather’s tennis career though is less well known. Having learnt tennis as a youngster, including with her older sister Kay, Heather returned to the sport in the late 1990s, winning her first Australian Senior Singles title in 1998 in Newcastle. In 2001 Heather was selected as a member of the Australian Alice Marble Cup 60+ team to compete in Perth. The team won the World Title and in the same year Heather, our fourth World Champion, went on to win the Womens 60+ World Singles title.

In 2006 Alison Ide became the fifth ACT tennis player to win a World Seniors Title, winning the 70+ Doubles in Turkey with Victorian Joyce Rogers. After winning numerous Australian Singles and Doubles titles from the mid- 1970s   and representing Australia at World titles between 1984 and 2006, her win in Turkey was a fitting end to a marvellous career. In 2017 Alison was inducted into the Tennis ACT Walk of Fame.

2009 saw Phil Higgs win the World 65+ World Singles Title in Perth; our sixth World Champion. Phil’s success went back to 1990 when he first won an Australian 45+ Doubles title with Trevor Hornery also from Canberra. In 2005 he was in the Australian 60+ team which finished fourth, then third in 2007 and in 2009 in the 65+ team which finished second. His Singles Title in Perth was the pinnacle of his tennis career and for a man who didn’t take up tennis until in his 40’s, a wonderful achievement.

The seventh Canberran to win a World Title was Colin Holgate. Colin is perhaps best known as the mixed doubles partner of Ros Balodis. The pair won ten Australian Mixed Doubles Titles together between 1998 and 2018. However, Colin also has won an Australian Mens Doubles title, in 2013 and competed in three World Team Championships in 2013, 2014 and 2015. The 2014 55+ Austria Cup event was held in Florida with the Australian team winning the title. In 2015 competing in the 60+ Von Cramm Cup in La Baule, France, the team also won the final to give Colin his second World Team Title.

Narelle Raftery has been a prolific tennis winner since her junior days in Canberra with ACT and NSW titles to her name. In seniors tennis she has won Australian Seniors Titles in singles, doubles and mixed and since 2013 competed in five World Team Championships. Her highlight year was 2017 competing in the W55+ Maureen Connolly Cup in Miami, Florida with Ros Balodis. As Narelle herself once said, if she was to win gold in a World Teams event she would need to be in a team with Ros. She was and she did(!) to become the eighth ACT world seniors tennis champion.

The most recent and ninth ACT world seniors champion is Helen Holcombe. A former top ten Australian junior and ACT Resident Champion, Helen began competing in seniors events in 2000, winning two Australian doubles championships. In 2018 in Umag, Croatia a chance pairing with German player, Reinhilde Adams, with whom she had never played, proved masterful, the pair winning the final in a third set tiebreak to become World 65+ Doubles Champions.

Over 50 years nine World Champions and thirty-nine World Titles. It is an impressive record of achievement; a record which is sure to be added to in the years ahead. With the latest news that Seniors World Championships will be extended to cover the ages 30+ to 90+ the sky is the limit (particularly if Ros continues her career).

In the meantime we celebrate the success of our Champions over the past fifty years and continue to enjoy playing our tennis, a “sport for life”.