Farrow thriving on and off the court 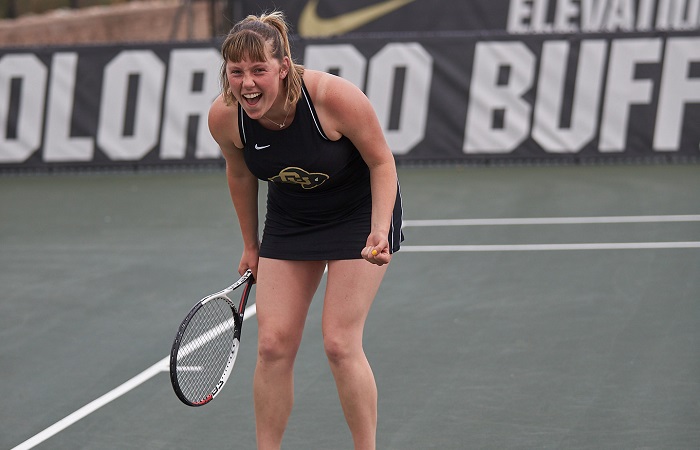 Canberra’s Tallulah Farrow is thriving both on and off the court at the University of Colorado in Boulder.  Currently back home in the capital on summer break, Farrow joined the tennis team in January 2019 and has been competing for the Buffs at the Division I college.

For the 19-year-old, the team environment of college tennis has had a positive impact on her game.

“I love it, I think it’s a much better environment to play in for me personally.  Obviously, you are playing for a team; you aren’t just playing for yourself so that’s extra motivation.

“In a tough match, when it comes down to it and it’s 5-5 in the third set and it’s 3 matches all, your team is there and essentially playing the match with you, screaming at you and encouraging you, it’s a lot more motivating and also a lot more rewarding.

“I have definitely become a lot more consistent as a player, and I think mentally it’s been a really good growth experience for me.”

Despite the season being cut short due to the coronavirus pandemic, the Buffs put together their most successful season since 2009, finishing with an 8-6 record.  With the team returning all but one of its current squad members, Farrow anticipates the young team will make a real impact in the upcoming season

“We have a super talented team.  We all kind of bonded a lot towards the end [of the spring season] and that really helps in the college atmosphere and when you are playing for a team.”

“It should be good to have the opportunity next year and see if we can do really well, I think our team could do really well in our conference.

Farrow has also been excelling off the court academically with the Canberran receiving the Morgan Family Buff Club Scholar-Athlete Award for the highest cumulative grade point average in the Sophmore class as well as being named on the Pac-12 Spring Academic roll.

Majoring in Philosophy, Anthropology and International Affairs , Farrow is grateful the opportunity tennis has presented her with academically.

“I really love school and like studying my subjects, I’m really passionate about it.  I definitely do see myself in the future doing academics.  My goal is to do in a PhD, in possibly political philosophy or something in that realm.

“Tennis is a really big part of college, and it’s given me the opportunity to really learn how much I like studying and really see what I want to do in the future.“

The teenager is eager to return to Colorado once international travel resumes.