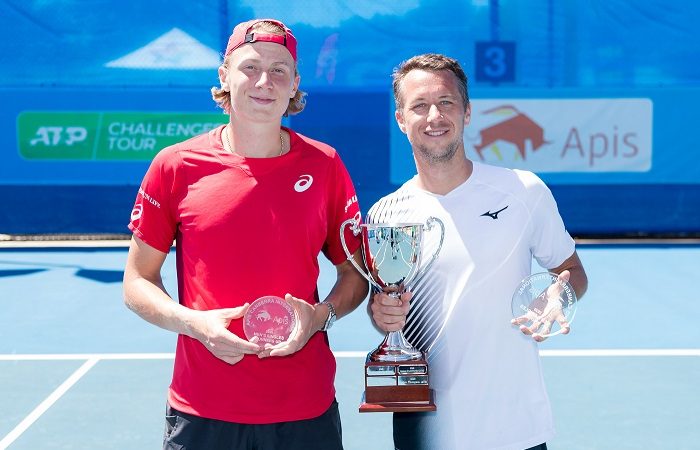 Kohlschreiber secured a hard fought victory over Emil Ruusuvuori (FIN) 7-6 (5) 4-6 6-3, while Frech was crowned the women’s champion after top seed Patricia Maria Tig (ROU) was unable to take to the court due to a foot and calf injury.

The men’s final was a battle of the generations, with 20-year-old rising star, Ruusuvuori (FIN), up against one of the most experienced players on the ATP Tour, in Kohlschreiber.

Ruusuvuori secured the early break in the opening set to go up 3-0, but Kohlschreiber was able to break back to level it up at 3-3.  From there things remained on serve and headed into a tiebreak, which the German secured 7-5.

The second set remained on serve early, until the Finn secured a break and went out to a 5-3 lead.  He held on to close out the set 6-4 and force a decider.

Kohlschreiber drew on his experience to break early in the third, taking a 3-0 lead.  He stayed solid on serve to close out the match and claim the title.

“I am very happy, playing the first tournament of the new season. It is the best start I could imagine.

“It was a very tough tournament. Tricky conditions, I think we both played a good final, but I think maybe my experience helped me out today.”

Kohlschreiber credited a solid off season for starting his season off well after struggling with some injuries in 2019.

“I had to work very hard in the off season to get fit again, so this is the best payout which you can have. I am very lucky, and I think I am playing really good tennis. Of course, the win this week was very nice leading into the Australian Open.”

Earlier in the day, the women’s presentation was held after Tig withdrew just prior to the match to see Frech crowned the champion.  The 22-year-old was in solid form all week in Bendigo and did not drop a set on her way to the title.

Despite not getting to take to the court today, Frech was pleased to claim her fourth ITF World Tennis Tour Title and with her match preparation ahead of Australian Open 2020 qualifying next week.

“I really enjoyed this week; it is pretty amazing for me to win this tournament. Especially after one year of injury, I am really glad I could play here. It is pretty special to win the tournament and hold the trophy.”

“Every match is the best preparation for the next tournament, so I am really glad I could play four matches here.”

Although the 22-year-old didn’t make it to Canberra this year, she is hopeful she will get the chance in 2021.

“I hope I can come to Canberra and play the matches before Australian Open, because it is the best way to prepare.”

The Apis Canberra International was relocated to Bendigo just three days before the event was set to begin due to the ongoing bushfire situation in the Canberra Region.  Tournament Director and Tennis ACT CEO Kim Kachel said it had been a collective effort to relocate the event and was incredibly thankful to all those involved.

“I want to take this opportunity to acknowledge everyone who assisted with the relocation of this event from Canberra to Bendigo.

“Thank you to the players, Fosterville Gold Tennis Centre, the Bendigo Tennis Association, the team of stringers, the AO Ballkid squad and local Bendigo Ballkids, our sponsors, and all the staff from Tennis Australia, the Member Associations and the whole Tennis ACT team.  We could not have delivered this event without you.”

“Our thoughts are very much with those communities across Australia who are being impacted by these fires.

“The event has taken part in the Aces for Bushfire Relief campaign, with a total of 997 aces across the tournament.  Combined with the gold coin donation entry, we have surpassed $100,000 raised towards the Australian Red Cross Disaster relief and recover campaign,” Kachel added.

The Bendigo Challenger also commenced today and will run until Saturday 18 January at the Fosterville Gold Tennis Centre.

Donations can be directed to the Australian Red Cross bushfire disaster relief and recovery efforts here.