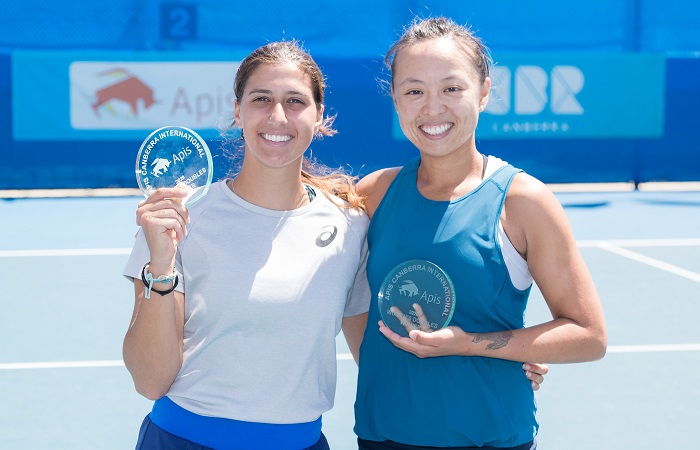 The Apis Canberra International (Bendigo) singles titles will be on the line on Sunday at the Fosterville Gold Tennis Centre.  The men’s final will be a battle of the generations with Next Gen rising star Emil Ruusuvuori (FIN) set to take on one of the most experienced players on the ATP Tour in Philipp Kohlschreiber (GER).  The women’s final will see top seed Patricia Maria Tig (ROU) play Magdalena Frech (POL).

Ruusuvuori has been in solid form all week and has claimed the scalps of four seeds, [3] Jannik Sinner (ITA), [8] Dominik Koepfer (GER), [13] Taro Daniel (JPN), and [15] Denis Kudla (USA) today.   The Finn came into the event off a quality end of the year which saw him win four ATP Challenger titles.

At 16 years his senior, Kohlschreiber will be drawing upon his experience in the final which includes eight ATP Tour titles, 450 ATP Tour victories and 25 top 10 wins.  The German has also been impressive this week, and won his quarterfinal over Steve Johnson (USA) this morning after it was held over from Friday at 7-6 2-2.  He then returned to the court in the afternoon to post a three set win over Evgeny Donskoy (RUS).

In 2019, Tig was one of the comeback stories of the year when she returned to the tour after 18 months off due to injury and pregnancy.  A finals appearance at the WTA event in Bucharest along with a WTA 125 series event title in Germany saw her soar up the ranking to No.111 by year’s event.  In today’s semifinal she defeated India’s Ankita Raina (IND) in straight sets.

Frech has been in solid form all week and is yet to drop a set, including defeating Canberra’s own Alison Bai in the opening round.  Frech knocked out Ekaterina Gorgodze (GEO) with a 6-4 6-3 victory in today’s semifinal.

The men’s and women’s doubles finals were played today, with Bai teaming up with Jaimee Fourlis (Vic) to claim the women’s, while in the men’s Luke Saville (SA) and Max Purcell (NSW) made it a clean sweep for the Aussies.

For Bai and Fourlis it is their second title together, after also winning the ACT Claycourt International #2 in March.  After losing the first set 7-5, the pair recovered to take the second 4-6.  In the match tiebreak they fell behind 8-5 before rattling off five consecutive points to claim the title.  The pair have now compiled a 10-1 record from their last three events together, with Bai saying the pair complement each other well.

“I think we gel well personality wise, Jaimee is a bit more fiery, I am a bit more laid back so I think we combine pretty well in that regard. We also get along really well off the court so that helps our chemistry on court.”

It was the eighth ATP Challenger title the pairing have collected since teaming up in 2019 with Purcell saying they have formed a strong partnership.

“We have been in a team together now for almost a year and I think it’s a Challenger level a lot of the guys mix up partners but we stick with each other. We know our game so well and pick each other up on the tennis court. We complement each other and we never get down. We find our chances and we take them.”The women’s singles final will begin at 11am, with the men’s singles final scheduled for not before 1.00pm.

The Bendigo Challenger will also kick off on Sunday with the ATP Challeger 80 event set to get underway. Top seed Miomir Kecmanovic (SRB) was a late withdrawal after progressing to the semifinals of the Qatar Open.

Every ace served during the Apis Canberra International (Bendigo) will see $100 being donated to the Australian Red Cross bushfire disaster relief and recovery.

Donations can be directed to the Australian Red Cross bushfire disaster relief and recovery efforts here.

About the Apis Canberra International

Due to the current conditions affecting Canberra, the decision was made to relocate the event to Bendigo.  More information here.