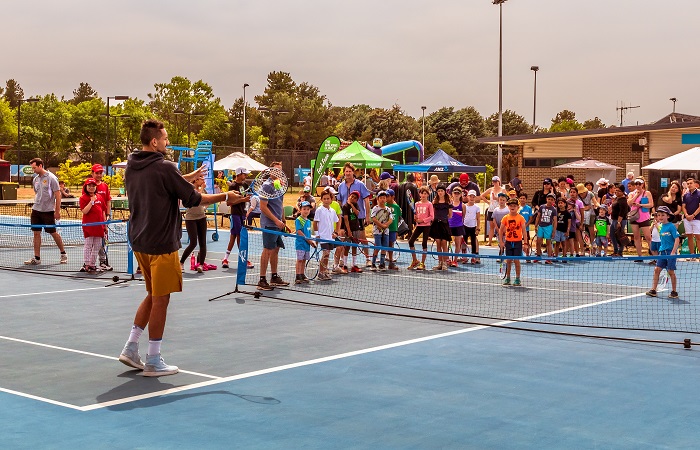 Over 500 people flocked to the Canberra Tennis Centre for Community Tennis Day on Saturday 2 November to kick start the summer of tennis in Canberra and officially launch the Apis Canberra International.

The first 100 kids through the gates received a free tennis racquets with the opportunity to participate in ANZ Tennis Hot Shots and Cardio Tennis demonstrations.  Kids also had the chance to try out their skills at becoming a ballkid for the Apis Canberra International.

Nick Kyrgios was king of the kids as he hit with kids and signed autographs, as well as promoting his NK Foundation.

The world No.30 enjoyed the chance to get out on his home courts with the kids.

“It’s a lot of fun. I grew up here and played here every day of my life, to see how much the place has changed, there is so many kids participating in tennis these days in tennis.  Coming out here for a few hours of my day is a lot of fun.

While Kyrgios will be busy representing Australia at the ATP Cup when the Apis Canberra International is on, he said it’s great to showcase Canberra on the international tennis calendar.

“I never thought it a million years there would be tournaments in my backyard where I could come out and come watch.  Again, having more tournament in Australia is a great opportunity as well.

“I know Jordan won the tournament here last year, so the quality of players is high and players are coming from all over the world come and play,” Kyrgios said.

Title partner the Apis Group fired up the barbeque raising valuable funds for Roundabout Canberra, while an appearance from Enchanted Canberra’s Batman and Snow White thrilled the younger kids.

Tennis fans had their photo taken with the Australian Open trophies, with the Norman Brookes Challenge Cup and Daphne Akhurst Memorial Cup on display.

The Apis Canberra International is set to take place at the Canberra Tennis Centre from 6-12 January 2020.  Information around ticket sales will be available in the coming weeks.