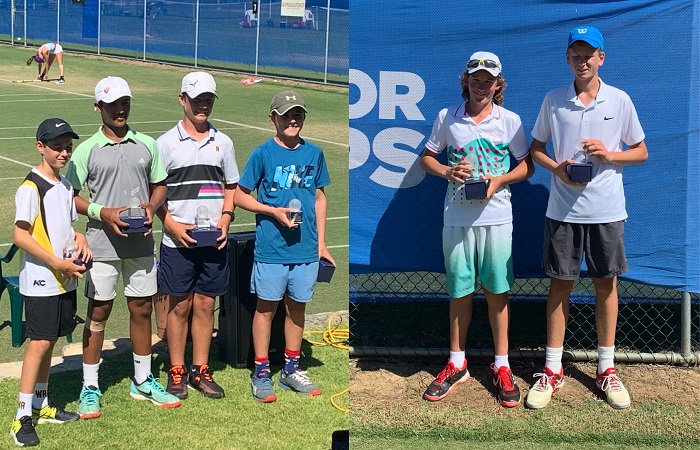 Canberra’s Hugh Taylor and Charlie Camus have taken out their respective doubles titles at the Australian Grasscourt Championships held at Cottlesloe Tennis Club in Perth, WA from 7-12 October.  The  ACT were represented by seven players with Dylan White, Sophie McDonald, Aliyah Dwyer, Jack Dugdale and Jessica Das, joining Taylor and Camus to gain invaluable experience on the pristine grass courts at Cottlesloe.

Taylor teamed with Boyd Schreiber (NSW) in the 12/u boys doubles to defeat top seeds of Gautham Santosh (QLD) and Jake Dembo (WA) 7-6, 6-4 in a see sawing and very entertaining final. Whilst in the 14/u boys doubles, Charlie Camus played with his regular partner Pavle Marinkov (NSW) to defeat top seeds Alex Despoya (SA) and Zachary Viala (WA) 7-6, 6-3 in what was a major upset.

In the singles, both Charlie and Hugh reached the quarterfinals of the singles and then won through their playoff matches to finish in 5th position, whilst Aliyah Dwyer posted some excellent performances and eventually finished 12th in the 12/u girls event.  Dwyer also made the quarterfinals of the 12/u girls doubles with Tahlia Kokkinis (Qld), while McDonald teamed up the Baihe Lin to reach the final eight in the 14/u girls doubles.

Other outstanding results of the past month include: