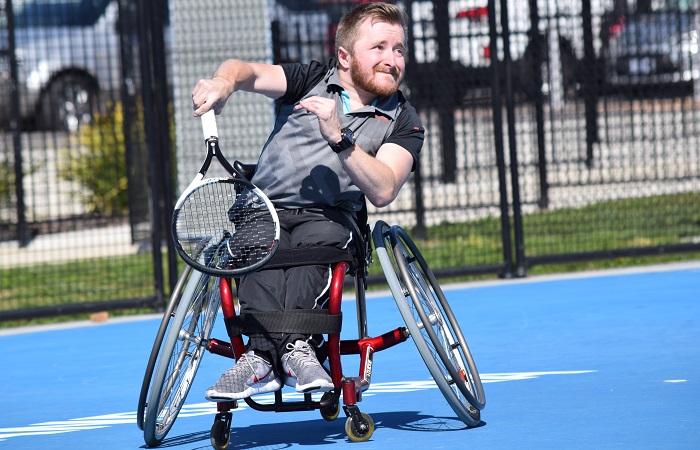 It has been a breakthrough year for Canberra’s Matthew Leggett who earlier this month broke into the world’s top 200 in the ITF Wheelchair rankings.  Leggett will line up for the Canberra Wheelchair Tennis Open, which kicks off at the Canberra Tennis Centre today and is seeded for the first time at the event.

“Last year I got through to the quarters so hoping this year to go a little further. It looks like I might be a seeded player this year which is something different for myself for once, it gives me a bit of an easier look in to the first match and I can get my tournament started in a positive way,” said Leggett.

For Leggett, reaching the world’s top 200 was an important milestone.

“It’s quite a big achievement for myself, it’s a goal I set at the start of this year as something that I wanted to achieve.  To be able to do that with still 2 or 3 tournaments to play, it’s something I’m pretty proud of.  It’s been a good start to the year.”

On Saturday, Leggett won the Most Outstanding Athlete with a Disability award at the Tennis ACT Awards for the second year in a row.

A huge career milestone for Matthew Leggett breaking into the top 200 of the ITF Wheelchair world rankings.

For a second year in a row, Matthew is the Most Outstanding Athlete with a Disability. #TACTAwards19 pic.twitter.com/UoJ1Svsbmd

Leggett has a first round bye, and will face the winner of fellow Canberra player Ante Busic and Danny Jeffery.  World No.82 Martyn Dunn is the top seed in the men’s event which also features rising junior star Riley Dumsday.  Earlier this year Dumsday, along with Hayley Slocombe who is top seed in the women’s draw, were part of the historic team who claimed Australia’s first ever junior World Team Cup title.

How the Aussie juniors became WORLD CHAMPIONS of #WorldTeamCup 2019 🥇

Hayley Slocombe, Finn Broadbent and Riley Dumsday were also voted by their peers as Team of the Year (of 42 competing teams) for sportsmanship and team spirit. Well deserved! #GoAussies | @ITF_Tennis pic.twitter.com/ElrkALwrfI

Play commences at 1pm on Thursday 19 September with free entry to the Canberra Tennis Centre.  The tournament will run until Sunday 22 September.