Record prizemoney on offer for 2020 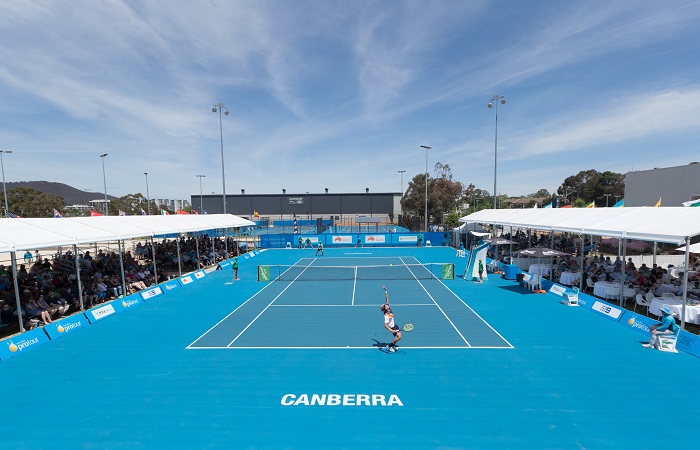 Record prizemoney will be on offer in Canberra with a new look tennis events calendar being unveiled for the capital in 2020.  With the shifting global landscape of events, Canberra is set to bolster its position as one of the premiere tennis destinations worldwide, offering multiple events across different surfaces in 2020.

The capital will cement itself in the summer of tennis alongside the inaugural ATP Cup via hosting the highest level ATP Challenger event in Australia and the most significant combined event the capital has ever seen.   The Apis Canberra International,  will take place from 6-12 January 2020 with a men’s ATP Challenger 125 and women’s USD$25,000 ITF World Tennis Tour event, while in March the ACT Claycourt International has received a huge elevation in prizemoney and ranking points with  back to back USD$60,000 ITF World Tennis Tour women’s events.

Canberra is renowned for running world class events as voted by the players, the ATP and ITF.   These have been recognised through winning the Australia Tennis Awards – “Most Outstanding Professional Tournament” on two occasions and the CBR Sports Award – “Minister for Sport & Recreations Award for Event Excellence”.   This exciting new event will now kick start the 2020 tennis calendar with some of the world’s best male and female players set to visit the capital.

The men’s ATP  125 event, will offer over USD$160,000 in prizemoney, more than double the amount previously offered at a Canberra event.  The highest level event on the ATP Challenger Tour, Canberra joins an elite group of cities hosting an ATP 125 event globally.

Canberra events have acted as a launch pad for players on the ATP Tour, with 21* current top 100 players competing in Canberra since 2016, including Stefanos Tsitsipas (GRE), Denis Shapovalov (CAN), Alex de Minaur (NSW) and US Open quarterfinalist, Diego Schwartzman (ARG).

A women’s USD$25,000 ITF World Tennis Tour event will be held alongside in what is anticipated to be one of the strongest fields at this event level as players begin their preparation for the Australian Summer of Tennis.

“This is truly an unbelievable calendar for 2020 and the anticipation is already building for this brilliant new event in January.  We are excited to once again showcase tennis in Canberra at the peak time in the Australian calendar.  Our previous events have been some of the strongest ATP Challenger Tour events on the calendar and we are excited to see the calibre of players the new event attracts.”

“It will also be fantastic to showcase the rising stars of the women’s game with it being the first time we have hosted a women’s Pro Tour in January at the redeveloped Canberra Tennis Centre,” Kachel added.

The Apis Group have joined as naming rights partners with Tennis ACT, with Apis Group Partner, Anthony Honeyman excited to see the Canberra community rally around the tournament.

“Apis is proud to continue our association with international tennis in Canberra. We are looking forward to seeing a stellar field in January and know Canberrans will be out in force to support such a wonderful event”.

The ACT Claycourt International #1 & #2 will be staged for the fifth time in March 2020 with next year to feature back-to-back women’s USD$60,000 ITF World Tennis Tour events, up from USD$25,000 events in 2019 (total USD$70,000 increase).  The tournaments play a pivotal role in the calendar, especially for young Australian players providing valuable match preparation for the American and European clay court season.

“Pro Tour events play a critical role in the development of the next generation of players and it is exciting to follow the journey they go on after competing in Canberra,” Kachel said.

“In 2016, Ashleigh Barty (Qld) competed in the ACT Claycourt International winning back to back doubles titles with Arina Rodionova (Vic) as she commenced her comeback to tennis.  It has been incredible to see Ash go from the clay courts of Canberra to the clay courts of Paris to claim the French Open title and go on to become No.1 in the world,” Kachel added.

The ACT Claycourt International included a strong connection to the female sporting community in Canberra in 2019.  Throughout the two weeks, Tennis ACT hosted a number of events to engage and promote female sports participation including combining with six other State Sporting Organisations to host a Girls Make Your Move Day, hosting the ‘Women in Business, Sport and Leadership Brunch’, along with a female only coaching course and a Girls only Junior Tour tournament.

“We see the event as a real chance to highlight women’s participation in sport, from the grassroots through to the elite level and we look forward to building on these initiatives further in 2020,” Kachel added.