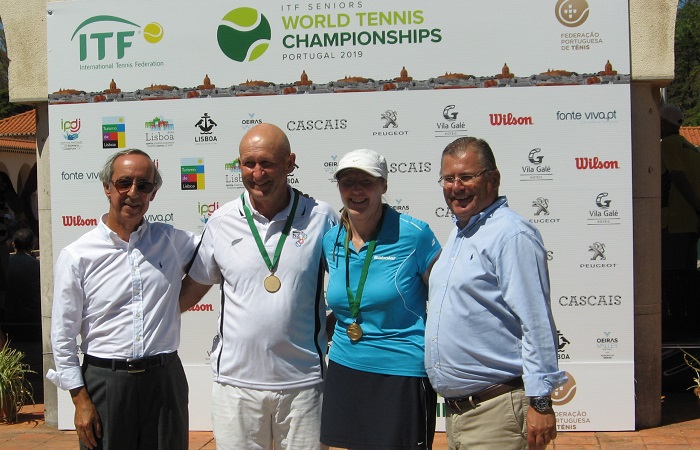 Canberra’s Ros Balodis has done it again, claiming gold in the 60+ mixed doubles at the ITF Seniors Individual World Tennis Championships held in Portugal from 10-17 August.  The victory is the Tennis ACT Walk of Fame inductee’s 27th gold medal at a world championships.

Balodis paired with New Zealand’s Peter Hampton with the fourth seeds cruising through to the semifinals without dropping a set.  In a tight fought semifinal, Balodis and Hampton edged out unseeded French pairing, Betty Michel and Patrick Enroult 3-6 6-2 10-7.

In the final they faced second seeds Robin Harris and Ross Persons with the Aussie-Kiwi pair dominating the match, claiming a 6-2 6-0 victory to win gold.

It was a great result for Balodis, who has spent much of the year sidelined with injury, with the Canberran enjoying her time on court with Hampton.

“I have played against Peter in mixed doubles over many years and he has probably had the edge in those contests, so it was nice to be on the same side for a change.  We played mixed together at the Gold Coast Seniors tournament in July this year, so we were able to use that event to work out which side we should receive on, and to get our combination going.

“I appreciated that Peter was very supportive and he put a lot of effort into working with me to get the best outcome.  It was a pleasure to play mixed with him.  At the Worlds Peter had previously won silver and bronze medals, so it was fantastic to share in his first gold medal, and then he backed it up with another gold in the 60 Men’s doubles.”

The week prior, Balodis captained the Australia team of  Fiona Walker, Leanne Scott and Rosemary Everett to a fourth place finish in the Alice Marble Cup in the ITF Seniors World Team Championships.  After going undefeated in the pool rounds, Australia fell 2-1 to France in the semifinals.  Fiona Walker (Vic) lost the opening match, before Balodis rebounded to level the tie at 1-1.  Balodis then combined with Rosemary Everett (Vic) for the doubles, but the pairing fell in a tight contest 5-7 5-7.

Balodis was pleased with how the team performed and enjoyed the two weeks in Portugal.

“We combined well and played some good tennis throughout the week.  All members of the team supported each other in our endeavours and we were proud to reach the semifinal.

“The Portuguese Tennis Federation had put a lot of work into upgrading the courts and facilities and made us feel very welcome.  I really enjoyed my team mates company through the teams week.  It is always an honour to represent Australia and I appreciate the opportunity to socialise with tennis players from other countries.”