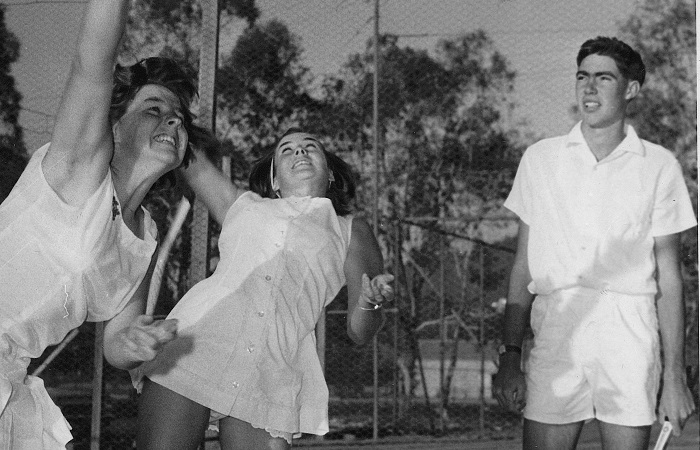 The 1960’s was a boom period for the nation’s capital. By the late 1960’s the population had reached 100,000 with new town development well underway in Woden and Belconnen.

New Law Courts, the Mint, Monaro Mall, the National Library and the Canberra College of Advanced Education, were developed and the first traffic lights installed in Civic.

Canberra in 1966 had an unemployment rate of 1%, over one-third of the population was under 14 and the capital had an annual population growth rate exceeding 10%. Boom years indeed.

Tennis thrived and is it any wonder that Roy Smalley described the tennis scene as the Sizzling Sixties. So here is a quiz to test your knowledge and for some, your memory of those heady days.

Q1. Who are the three individuals pictured in this 1965 Canberra Times photo and what were they training for? The two girls played each other in the U17 Girls Singles Final in the 1965 ACT Tennis Open.

Q2. The 50th Anniversary Permanent Heads Shield was played in 1960, with the winning team from the Department of the Interior, being ACTLTA first graders – Jim Jorgensen, Cres Roberts, Leo Lonergan and Harry Manning. On what unusual venue was the event played?

Q3. What was the name of the popular junior tournaments and coaching clinics played throughout country NSW and Canberra during much of the 1960s? (Hint: a popular drink still available today).

Q4. In what year and who am I? I was an unknown and unseeded player who caused one of the greatest boilovers in the history of the ACT Men’s Resident Championships.

Q5. Whilst I won the Men’s Doubles, my sister won the Women’s Singles, Doubles and Mixed Doubles at the 1968 ACT Open. Who am I and more importantly, who was my sister?!

Q6. Why was the Parks and Conservation Depot opposite the old Coach House Motel so important to planning for the new National Tennis and Squash Centre during 1967 – 1969?

Q7. By the end of 1969 sixteen clubs were affiliated with the ACTLTA – ANU, Ainslie, Barton, Braddon, Campbell, Flinders, Forrest, Majura, Narrabundah, North Woden, O’Connor, Queanbeyan, Red Hill, Throsby, Turner and Yarralumla. Of these clubs six had not been affiliated in 1960. Which were they?

Q8. Why was John Southwell, a long-term coach in Canberra and Queanbeyan, banned from playing in pennant competitions and tournaments, during much of the 1960s?

Q9. Which future Canberra champion won the Open Junior Girl’s Singles in 1968, beating (Answer to Q5.) in an enthralling final 8-6, 3-6, 6-3? In the same year she also won the South Australian Under 17 Girl’s Singles and Doubles Championships.

Q10. Which family had an imposing tennis record in Canberra during the 1960s – not only featuring regularly in winning pennant teams but collectively winning thirteen Resident titles and being runner-up on five occasions, between 1960 and 1969?

Q12. What momentous rule change occurred in 1968 which had an impact on tennis throughout the world?

Q13. What year and at what tennis event was the last playing appearance in Canberra of Margaret Smith (at the time shortly to become Court)? Margaret had been the ACT Open Women’s Singles, Doubles and Mixed Champion in 1962.

Q14. My grandfather is a member of the ACT Tennis Walk of Fame. In 1961 I was the ACT Under 15 Boys Singles, Doubles and Mixed Tennis Champion. I subsequently retired to the South Coast and took up a “retirement” career coaching junior golf. Who am I?

Q15. What decisions were made by the ACTLTA in late 1969 which set the direction and positioning of tennis in the national capital through to the present day?