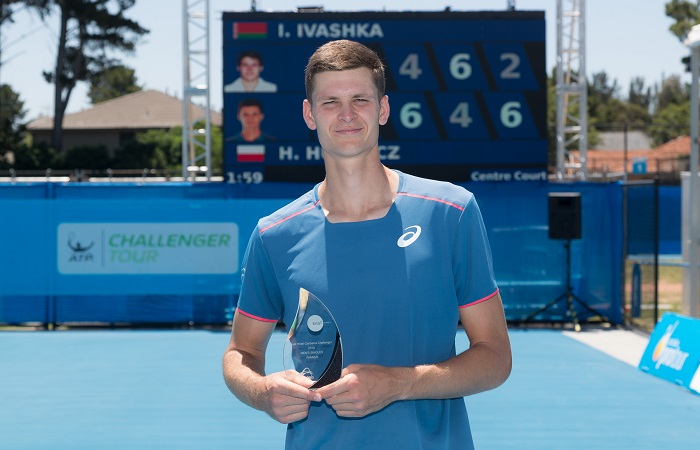 Poland’s Hubert Hurkacz has claimed the East Hotel Canberra Challenger in a hard fought three-set battle with Ilya Ivashka (BLR).  With only six places separating the pair in the ATP Ranking it was always set to be a high quality affair with Hurkacz reversing last week’s loss to Ivashka in India, winning 6-4 4-6 6-2.

Hurkacz came out of the blocks firing breaking Ivashka in the opening game of the match.  The Polish world No.88 was solid on serve for the remainder of the set, closing it out 6-4.

Things remained on serve early in the second before Ivashka secured the break to go up 4-2.  The world No.94 served for the second set at 5-3, but Hurkacz broke back before another break of serve saw Ivashka take the set 6-4.

Hurkacz again broke in the opening game of the decider and secured another break to go out to a 5-1 lead.  Hurkacz closed out the match 6-2, hitting a forehand volley winner at the end of a 19 ball rally.

The win secured Hurkacz’s third ATP Challenger title in seven months and has provided him with plenty of confidence ahead of Australian Open 2019.

“I was expecting a really tough match, but I was happy to play a rematch. Obviously, I knew how he played, so I tried to make a few things better on my side, and it worked.

“It was a great week for me here, especially playing my second week this year. Coming into the final and winning the tournament means a lot for me and gives me confidence coming into the Australian Open.”

Hurkacz had great support throughout the week with a vocal group of Polish fans supporting him.

“It was really good with the local support, I wasn’t expecting that and it so was a nice and a surprise for me, and I am very thankful for all the support. For the finals, the crowds were so big and so it was so good with so many people watching,” Hurkacz added.

In the men’s doubles, third seeds Hugo Nys (FRA) and Marcelo Demoliner (BRA) defeated Andre Goransson (SWE) and Sem Verbeek (NED) 3-6 6-4 10-3.  It capped off a great week for the first time pairing who faced match points in their second round match.

They again came from behind, after losing the first set they went down 1-3 in the second before a huge comeback, winning five of the next six games.

Nys was pleased to come through the week and win the title.

“We have been through some tough matches this week. We saved match point in the second round and a very tough situation in the tiebreak yesterday in the semis.

“Today we kept fighting, and kept fighting. We had a very good attitude and everything matters in doubles, and nothing is finished until the end. We are very happy with the ending to this week and the way we played today.”

Nys and Demoliner are both heading to Melbourne for the Australian Open but will play with different partners.