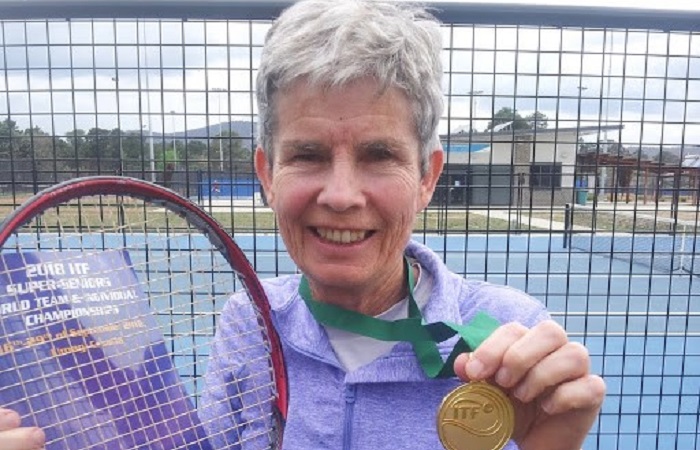 It was Holcombe’s first gold medal in her third appearance at the World Championships, after previously winning silver in the team’s event in 2000.

After receiving a walkover in the opening round, the pairing upset the number 2 seeds in the quarterfinals, before coming from behind in the semifinals to defeat the fourth seeds, 10-8 in a match tiebreak.

The final saw them face seventh seeds Marjory Love and Rosemary Wilson from Great Britain.  After dropping the first set 6-4, Holcombe and Adams responded to win the second 6-2.  They then held their nerve to clinch the tiebreak 10-6, to claim gold.

Holcombe said the final was a big moment and the duo were pleased to maintain their composure.

“I think it’s an achievement to get into a final where there’s an umpire, you’re playing in a stadium with your name in lights, and not let your nerves get the better of you.”

Holcombe and Adams were the eighth seeds and surprisingly had never played together, but Holcombe said their games really complemented each other

“We work well together as a team, because she’s really good on the baseline and I work better at the net. She’s an ideal doubles partner because she’s very fit and very determined, which is a bit like me.”

While Holcombe has been played in teams events for a number of years, since retiring in March 2017, she has spent a lot more time back on the court.  Holmcombe also teamed up with her husband, Greg in the mixed where the pairing lost a tough 7-5 5-7 7-10 encounter to eventual silver medalists Lillian Geey and Godfrey Evans.

Holcombe will now prepare to represent the ACT at the Australian Seniors Team Championships in Shepparton in January, before competing in the Individual events the following week.