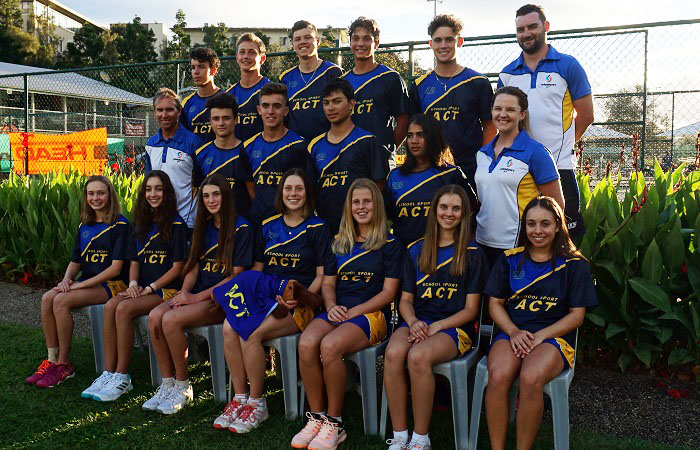 Team ACT had a great week competing at the 2018 School Sport Australia 18-and-under National Tennis Championships (Pizzey Cup) held at the University of Queensland in Brisbane from 29 April – 6 May.

The team posted one of its strongest performances in recent years, recording a 12-6 victory over Tasmania, and falling in a close battle against South Australia 10-8.

Team manager Diana Webster highlighted the importance of the team competition and the positive culture surrounding this year’s team.

“As tennis is such an individual sport, Pizzey Cup is a great experience for young players to be involved as a team.

“This year the players really worked well together to create a supportive environment on and off the court. Under the leadership of team captains Tallulah Farrow and Jamieson Nathan there was plenty of cheering from the sidelines, high-fives and fist-bumps in doubles and mixed-doubles and general comradery.

“All of the players gave it their all and it was a tough week of competition.”

Three ACT players were named in the Australian Merit Team, with Jamieson Nathan, Tallulah Farrow, and Ashleigh Simes receiving the honours.  As a result the trio will get to attend Australian Open 2019.

It is the first time three ACT players have received the accolade for a number of years with Diana Webster adding it was a testament to their performance during the week.

“It is such a great indication of how well those players in particular performed as they had to win the majority of matches they played to be considered for the merit team.  This was especially tough to do as they were all playing the top ranked players from each state in all matches they were in”.

“Todd was able to give on the spot feedback to players as well as an individual summary of their play throughout the week. Having three managers/coaches with the team meant that more feedback could be given as more matches could be watched.”

Congratulations to the team on a great week and thank you to Diana, Chris and Todd for managing and coaching the team.

Additional photos from the week can be found here