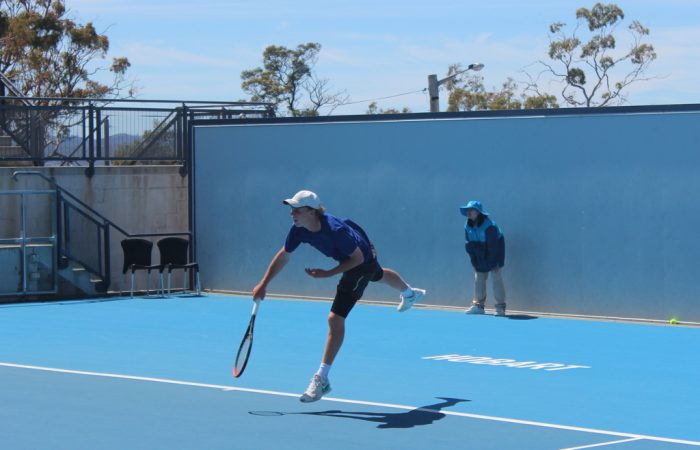 The opening long weekend of the inaugural Junior Universal Tennis Rankings (UTR) State Performance Championships saw champions from the 12/u and 16/u age groups crowned at the Domain Tennis Centre on Sunday.

The event replaces the annual December Showdown this year due to the ongoing impact of COVID-19 and state border restrictions, and is part of a new series of events taking place across seven Australian states and territories this month.

Launceston’s Oliver Hadley and Hobart’s Alicia Dale were the standout competitors in the 16/u division, with the duo claiming the boys and girls singles titles respectively.

Hadley (pictured above) then paired up with Hobart’s Ben Fergusson to take out the doubles crown, with Dale following suit in the girls doubles alongside singles runner-up Brooke Miller.

The 12/u division saw Launceston’s Oliver Carswell and Hobart’s Olivia Wilkinson also triumph in their singles and doubles events.

Tournament Director Matthew Scott declared the weekend a success and praised the standard and sportsmanship displayed across the three days of competition.

“It’s been a big year and it’s been amazing to be able to finish 2020 with our top-tier junior event,” he said.

“There has been some quality tennis across the two divisions so far, and we’re looking forward to finishing strongly with the 14/u and 18/u age groups this coming weekend.”

Universal Tennis Rating (UTR) is a purely results-based global rating system which rates all players on the same 16-point scale regardless of age, gender or location.

The first UTR event was held in Tasmania in July as an alternative to Australian Ranking Tournaments, which will return from 1 January 2021 after being suspended due to COVID-19 restrictions.

“Ever since UTR has launched in Tassie, everyone has reacted positively by jumping on board, creating their profiles and competing,” Scott said.

“A lot of the clubs in the state have engaged with this platform to run their events, which provides opportunities for players to build their rankings and encourages level-based play.”

With the 14/u and 18/u divisions to be held from Friday 18 – Sunday 20 December at the Domain Tennis Centre to conclude the Championships, Scott said he was looking forward to seeing the event grow statewide in the future.

“This is the inaugural event in Tasmania, with similar ones being held all over Australia,” he said.

“We plan to run this annually in December, with the plan for a different region of the state to host each year.’

“It provides a great opportunity for the community to support local tennis and to get around this event, which we see as being quite a prestigious one for years to come.”