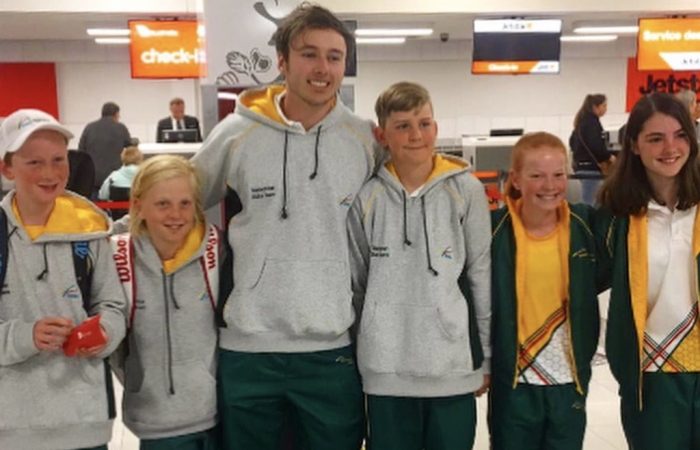 As 2020 comes to a close, Tennis Tasmania will be saying goodbye to our Team Tennis and Tournaments Coordinator Matthew Scott, who is moving into a Competitions Manager role with AFL Tasmania in the New Year.

Matt joined the team in May of 2018, moving to Hobart after previously working for Queensland Touch Football as a Competition and Venue Coordinator.

The backbone of the tournament space in the state, Matt has built strong relationships and established a number of thriving junior and adult leagues in his time with Tennis, becoming a valued member of the team and tennis community along the way.

Matt took the time to reflect on his time with Tennis in the island state and has shared his thoughts with us.

On his role as Team Tennis and Tournaments Coordinator:

One of my core focuses has been establishing the junior base of participation and strengthening the competition pathway, with the aim of building the profile of the sport.

A big goal for me has been to provide playing opportunities for everyone and anyone, and making sure that all players have a good experience when they take to the courts.

With the juniors, I’ve tried to help them become better versions of themselves, not just on the court but off-court as well, through instilling team values and encouraging the developing of friendships.

I feel my knowledge and skillset has been broadened immensely through conversations and meetings with our team, stakeholders, and I developed a lot more confidence.

We have a close connection with our coaches across the state, and our clubs are always heavily involved with our programs that we deliver at their venues; they’re very receptive.

I’m fortunate enough to have been able to work at all three international events held in Tassie for the past two summers in Hobart, Launceston and Burnie.

The Hobart International is such a high profile event that attracts an amazing calibre of players, and I’ve been lucky enough to have worked in Court and Ground Services and as the Ballkid Lead across the two years I’ve been with Tennis.

To be there contributing to such a great team, it’s quite special to be involved in.

I’ve also worked in Player Services at the Launceston International, but out of the three events it’s the Burnie International which is closest to me.

Another highlight of my time in Tennis was taking our 12/u Bruce Cup team away to WA in October 2019 as Team Manager alongside our Talent Operations Manager Trent Constance and our Schools Development Coordinator Alyssa Hibberd.

It was a memorable experience just seeing the kids in a team environment and supporting each other, and learning strong values.

I’ve been grateful to have some freedom in my role to try some things that have grown and will be a part of the future in the state.

I’ve started up our Tassie Junior League, which has become our junior yellow ball competition which runs each school term in the North and South, with numbers growing every season.

In 2020 we launched the Southern Tennis League, our adult competition in the south, with more than 80 players from seven clubs competing across two divisions in each of the seasons to date.

I’ve been a part of the group who started up our Team Tennis program statewide for primary school-aged junior players, which has received strong support from schools and parents this year.

I’ve really enjoyed my time in Tennis, and I feel the sport in the state is in a really good place, with a lot of passionate people behind the scenes doing good things.

There’s a strong junior base of participation, and there’s a pathway that is being refined and developed for these players to continue on in the sport, which will lead to more people playing more often, and higher participation numbers in our tournaments.

I’ll still be around the sport and touch base here and there; I have my eyes on competing in the Cygnet Open in February, which is a great event.

I’d like to thank everyone from the team and everyone I’ve liaised with over the past few years, from the wider tournaments and competitions team and network interstate to our Tennis Tasmania team.