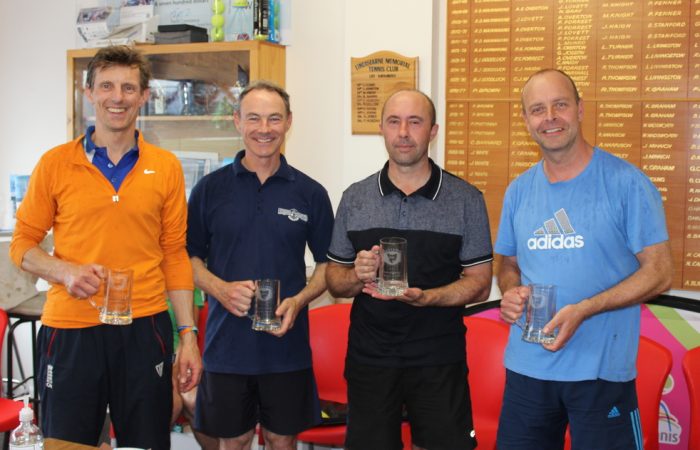 Saturday saw the Southern Tennis League summer season come to a close, with a new powerhouse emerging in Division 1 as another team claimed back-to-back titles on home turf.

Lindisfarne Tennis Club played host on finals day for the second-consecutive season, with the four teams across two divisions playing through wet and windy conditions to ensure all six rubbers were completed in each decider.

In the Division 1 decider, the Domain-Ators (main picture) emerged victorious over club mates the Domain Penguins in a close contest, claiming a narrow 3-3-31 to 3-3-27 win over the previously undefeated minor premiers.

Represented on the day by Rob McEwan, Justin Bowman-Shaw, Alex Paltulny and Mike Webster, the Domain-Ators took the first three sets of the final before hanging on in the rain to maintain a four-game advantage at the end of the day.

The Lindisfarne Sharks capped off a second consecutive undefeated season in Division 3 with a strong 5-5-34 to 1-1-16 win over the Kingston Rebels.

Led by Hudson Pennells, Thomas Wilson, Nigel Barling and Sean Kalimnios, the Sharks were well-supported by club members on the day and gracious in victory.

Team Tennis and Tournaments Coordinator Matthew Scott was pleased with the high level of club involvement across the seven weeks of competition.

“The level of support from the seven clubs involved in the STL has been fantastic, with more than 80 players competing across the two divisions again this season” he said.

“The standard of play and team spirit has been impressive, with clubs taking ownership and pride in when hosting each week.”

“Thanks again to the Lindisfarne Tennis Club for hosting another great finals day and to all of the players and volunteers who contributed to the summer season.”