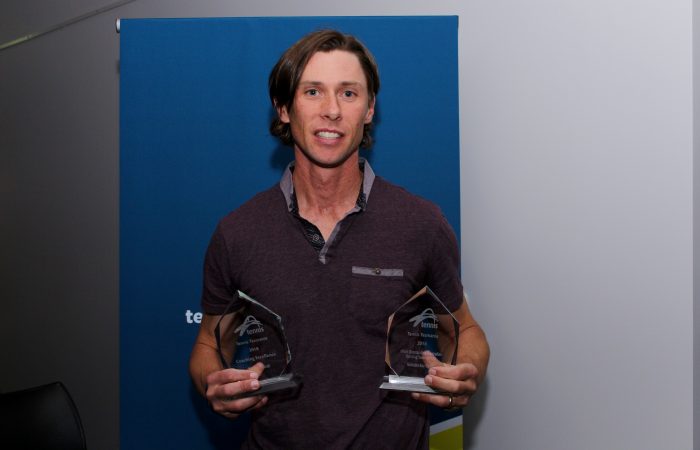 When asked what makes a good tennis coach, Tony Blom did not need to pause.

“Being passionate,” he said. “You have to love doing it.”

The answer is not surprising from the hard-working Blom, who has built a reputation as one of the state’s best coaches. That reputation was further enhanced at the 2018 Tasmanian Tennis Awards, where Blom received the Coaching Excellence Award for a third consecutive year.

“It is nice to be recognised for all the hard work,” the Hobart-based Blom said, before humbly adding: “But all coaches work hard.”

> Find out all the Tasmanian Tennis Awards 2018 winners

Blom, who grew up playing tennis in Tasmania, began coaching when he was a teenager. He is now the head club coach at the Domain Tennis Centre, Geilston Bay Tennis Club and Rosny Park Tennis Club. He conducts weekly coaching sessions with more than 10 schools and for the past nine years, has also run his Ace Tennis Coaching business.

“Seeing the kids enjoying playing is the most rewarding part, whether that is at beginner level or in tournaments,” Blom explained of what drives him most.

A dedication to providing more opportunities for others to learn and play tennis is one of the main reasons Blom is a big supporter of the state’s first inter-club ANZ Tennis Hot Shots Match Play competition, which launches in November.

“I think that is really crucial to have that link between what you are doing in coaching programs and into match play in a fun, social environment,” Blom said.

The tournament held its fourth edition in July, with Blom serving as tournament director. The event attracted a strong field, including Tasmanian’s top-ranked player Harry Bourchier, and offered a wide range of competitions to cater for different skill levels.

“It is growing every year and we keep adding side events in, such as mixed doubles and a rookie event in for younger kids to play. We want to make it a carnival of tennis where there is something for everyone,” Blom said.

Leaving the Burnie Tennis Club with his two Tasmanian Tennis Awards on Saturday night, Blom proved the perfect example that passion does lead to success.