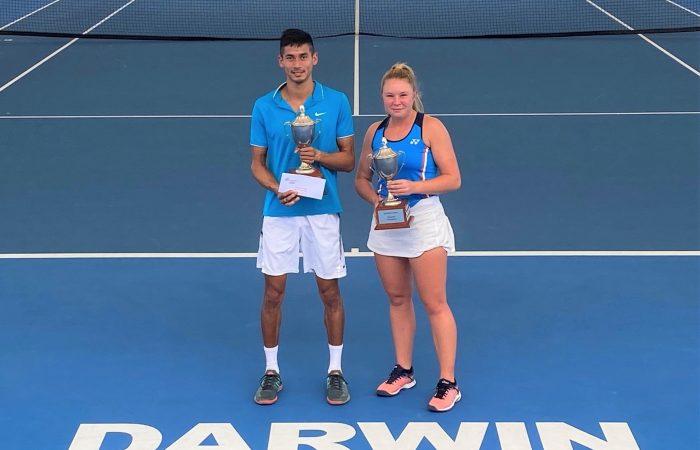 Jessica Fowler has claimed two interstate AMT Gold titles in the one day, taking out the women’s singles and doubles events at the Darwin Open on Wednesday.

Ranked 64th nationally heading into the tournament, the Tasmanian No.1 carried her recent winning form into the event to eventually defeat first seed and Australian No.26 Amber Marshall in the final at the Darwin International Tennis Centre.

The 20 year old is daring to dream big, with this week’s wins coming off the back of a doubles title and singles quarterfinal appearance at the AMT Gold Bundaberg Open in May.

She attributed her success to working hard alongside training partner Zara Brankovic in Hobart under coach John Playle, as well as arriving in Darwin early to prepare for the humid conditions.

“The weather has been really nice up here, but it was hard in the first couple of days of training to get acclimatised, especially coming from Tassie where it’s been pretty cold and raining most days,” she said.

“Those training days were really important, as were the first couple of matches just to get through, and I was lucky that I was switched on.”

Fowler defeated Brankovic en route to the final, with the two squaring off against each other for the first time in competition.

“It was the first time I’ve played Zara, and we know each other’s strengths and weaknesses,” Fowler said.

“It was difficult to play against my friend and doubles partner, so to be able to pair up and claim the doubles title with her the next day was so good.” 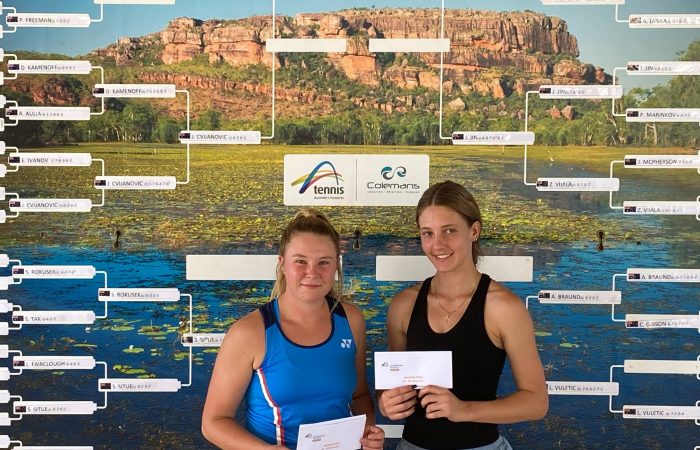 Fowler’s breakthrough singles victory over Marshall, who competed in the Australian Open doubles draw in 2020, is one she considers a career win to date.

“I’ve played Amber many times before, especially in the ITF Junior events as we’re the same age,” she said.

“She played in the ‘AO’ last year, so she’s got a few good wins under her belt.”

“I had never come close to beating her before, with my best result against her probably ‘one and one,’ so to turn it around in a final was a big triumph.”

Reflecting on a pandemic-affected 12 months, Fowler says her motivation levels are high after putting in the work while Australian Ranking events were postponed.

“Last year we looked at as a large training block due to being unable to compete,” she said.

“Coming into this year we were ready and have tried to target as many tournaments as possible just to get the match play back up.”

“The UTR Pro Series events over summer were great for match play, with the round-robin format guaranteeing five matches, but now I want to focus on improving my Australian and ITF rankings, given that opportunity to compete again.”

While her immediate attention will be on the 95th NT Open Championships commencing this Friday, where she is seeded third in the Open Women’s Singles, Fowler is hopeful of travelling abroad in the coming months to continue her development.

“I’m planning to head overseas towards the end of this year, depending on COVID, so at the moment I want to play as many AMT’s as I can to prepare,” she said.