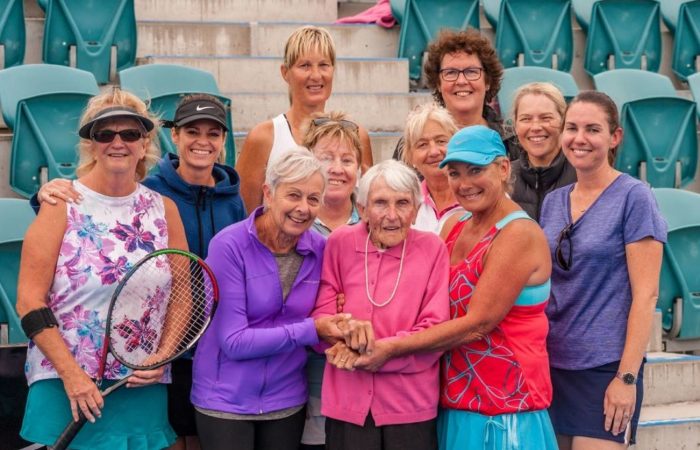 A well-known long-term contributor to the sport in the North of the state, Joan was a Life Member of the City-Suburban Tennis Association, Tennis North and Hart Street (now known as Newstead Tennis and Squash Centre).

Joan also received an Australian citizenship award for volunteering in sport in 2000, a testament to her willingness to take on a wide range of roles and responsibilities across a time period spanning more than four decades.

Son David recalled her immediate connection with the sport, which began when he first picked up a racquet.

“Mum got involved in tennis through me playing, and in her early days she worked in the canteen and helped out with the junior and the triangular series events,” he said.

“She didn’t start playing the sport herself until she was in her early forties, with her unorthodox style and shot placement tactics contributing to her teams winning a handful of A-Grade pennants.”

Holding a range of roles and titles with the City-Suburban Association, including that of secretary, Joan was organising pennants for almost 1100 players per week at its peak, according to David, with in excess of 170 teams spanning across a range of mid-week and weekend rosters at any one time.

“Back then there were obviously no computers, so she dedicated a lot of time to writing out the draws and results,” he said.

“And she said that in her entire time as an administrator, she was never confronted with any complaints.’

Joan was farewelled at a public service in Launceston last week, with the Carswell family also receiving tributes from far and wide.

“Mum was full of energy and always on the go, she loved life and loved her tennis,” David said.

“We’ve had so many people reach out in the past week to say how much of an impact she has had on the fun times in their lives, which has been comforting.”

“She received a lot of recognition over the years, and one thing that sticks with me was when the midweek ladies invited her down for the finals a couple of years ago and looked after her.”

“It was really touching, to be honest.”

“She passed the enjoyment of the sport down through the Carswell family, which has been wonderful to see.”