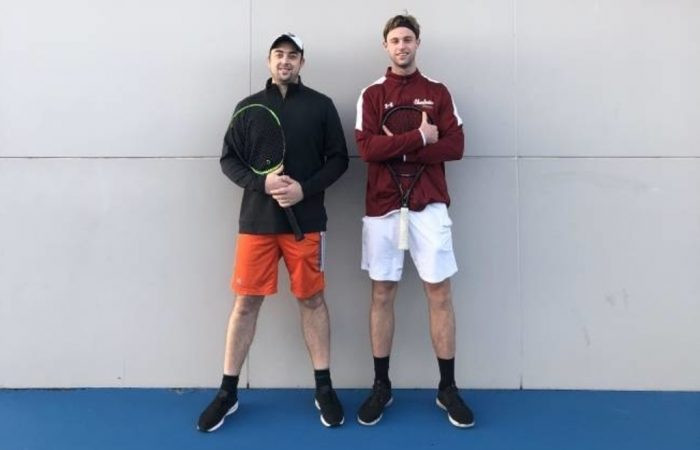 Almost 100 Tasmanian tennis players will come together on Saturday 21 November for the annual Tennis North versus the North West Tennis League Challenge.

Held this year in Launceston at two venues, Tennis World Launceston and the Newstead Tennis and Squash Centre, the event will see singles and doubles matches contested across five divisions, culminating in a social barbeque at the end of the Gala Day.

North West Tennis League committee member Shaun Summers believes the popularity of the current NWTL season has contributed to not only the calibre of Saturday’s field of players, but has helped to connect the two regions on and off the court.

“After a break from competition, the North West Tennis League is now in its fourth year, and it’s been the strongest year so far,” he said.

“A lot of current and former college players are taking part, with a lot of players travelling from the North to compete, led by Sam Whitehead and Ruben McCormack,”

Burnie’s Elliot Johnstone (pictured above with Ben Cawston) echoes Summers’ sentiment, having noticed a lift in the standard of play since returning to the island state following the end of his time overseas at the University of Texas Rio Grande Valley, the same college Whitehead recently received a scholarship offer to attend.

“Before I left for college in 2014 the North West Tennis League wasn’t super competitive, but now you have to be switched on for entire matches, such is the level that it’s at,” he said.

“As a collective, the players representing the North West are really hungry to win on Saturday, we really want to beat them, but we’re also looking forward to catch up when the games are done.”

“We’re hopeful of having the Southern region get involved with similar challenges days in the future, as the highlight of events like this is socialising with players from all around the state.”

Summers, who co-organised the Gala Day with Tennis North President Craig Boyce, is looking forward to seeing the planning come to life on Saturday.

“It will be really competitive and we’re excited to see some of the state’s best players in their respective divisions challenge each other,” he said.

“It’s grown from what we’d originally planned and created a lot of interest, which is great.”

“The friendly rivalry has been heating up online and in the local media, which has added to a really good build up.”

Boyce believes the hiatus in play due to the pandemic has seen players keener than ever for match play opportunities.

“We’re pleased to be able to enter player across five divisions on Saturday, with the age range of participants ranging from one player who is 12 through to players in their eighties.”

“We have aimed for the event to be family-friendly, social and inclusive.”

“Tennis is a great game for all skill levels, and we’ve tried to match up players so that the matches will be competitive.”

Boyce says teamwork was the key to the event going ahead.

“Shaun has made a shield and trophies for the competitors, which is great, and we’ve had strong support from James Bolzonello, Ben Holden and all of the players from the clubs in both regions.”

Summers is optimistic of the event fueling the fire for more interregional challenges in the future.

“We’re really looking forward to building relationships between the different regions in the state and communicating with each other moving forward,” he said.

“It’s all about doing our part to grow the sense of community among tennis players in Tasmania.”

The Tennis North versus the North West Tennis League Challenge commences across the two aforementioned clubs from 9:30am on Saturday 21 November, with five divisions to run including A Grade, Reserve, Womens’, 50-plus, and juniors.