Harry Bourchier reflects on 2020 ahead of big summer 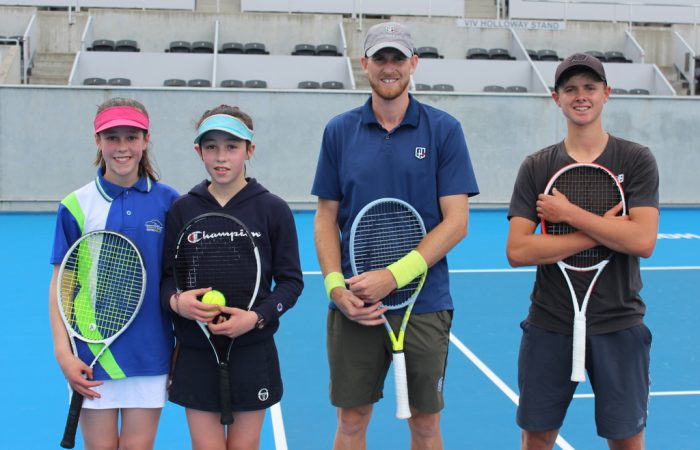 Tasmanian Harry Bourchier is looking forward to spending his first Christmas in the state in nearly ten years following a confidence-boosting run of form in Brisbane.

The Melbourne-based 24 year-old touched down in Hobart late last week and was all smiles when reflecting on his year after hitting with junior players Zola Case-Boag, Escher Case-Boag and Case Ambler (picture above) at the Domain Tennis Centre on Wednesday.

“I’m very happy to be back in Tasmania after spending the time in lockdown in Melbourne and glad things are improving in Australia,” he said.

“(Being in lockdown in Victoria) has been tough but I was fortunate enough to get a permit to be able to play tennis every day, so I’ve been practicing five or six times a week.”

“Hopefully next year things will free up a little bit and make it easier (to travel).”

Bourchier had made the quarterfinals at the Australian Pro Tour tournament in Geelong in March when tournaments were postponed due to the pandemic, but in recent months has been able to gain valuable match practice with Victorian Premier League side Royal South Yarra and the subsequent introduction of Universal Tennis Rating events.

After getting used to the UTR format, he claimed a victory in the final Pro Series event before the break when Queensland’s Bernard Tomic pulled out of the final on home turf.

“I’ve spent the last three to four weeks playing in the UTR events, and I won the last one in Brisbane before coming down here,” Bourchier said.

“It’s a lot of matches, but with the round robin I had four guaranteed matches in each tournament, so I was able to compete even if I did lose on the first day”.

“Recently I played (Australian Open wildcard recipient) Marc Polmans, who’s ranked World No.120, and I knocked him off 6-3, 6-4, so that just shows that with training and everything has been a positive for me.”

Following a short Christmas break, Bourchier will head overseas in an attempt to qualify for the Australian Open after making the quarterfinals of the playoffs this time last year.

“Qualifying is going to be taking place in Doha (Qatar), which is very unusual, so I’ll have to head over there and then go into a Covid bubble on the way home,” he said.

“I’ll go back up to Brisbane and prepare for another UTR event where I’ll get four matches, and then I’ll head off to Doha on the sixth of January and compete there on the ninth or tenth.”

After jumping from a ranking of World No.750 to inside the top 300 in the 2019 calendar year, Bourchier is candid about the momentum halt he experienced in 2020, after reaching a career-high of 279 in January.

“I wasn’t able to consolidate this year and I missed six months of overseas tournaments,” he said.

“Having said that, I’m pretty refreshed and I feel like my game is in a positive position.”

“This is the first year I’ve spent a good chunk of time in Australia, and I feel it can snowball and go in the right direction for me.”

Currently ranked at No.325, Bourchier is thinking big in terms of short and longer term goals, and is confident that next year will be one to remember.

“If all goes well I’d like to go top 200, which would get me the qualifying on my ranking,” he said.

“From there the aim would be top-100, and I’ll definitely be striving for that in the next two to three years.”

“I’ve worked on my fitness and my strength and a few areas of my game, and I think that I can hit the ground running in 2021.”