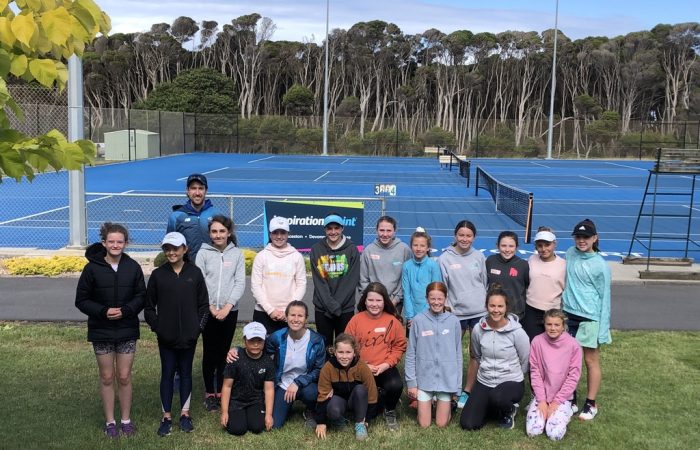 A group of Tasmanian junior players aged 9-14 years braved rainy conditions to engage in a full day of on and off-court experiences during the first Females in Tennis Development Camp at Devonport Tennis Club in early December.

The camp was one of 25 specialist female development days being held across Australia, with the aim of amplifying opportunities for girls and women in tennis, as well as identifying players for state and national development pathways.

Designed specifically for girls and reflective of what is being seen in the modern women’s game, the camps focus on skill development, peer connection and unique experiences within tennis.

National Development Squad Coach Raphael Durek was pleased with the turn out and commitment displayed from the inaugural intake of local female juniors.

“It was great to see a strong number of girls, sixteen in all, attend the state’s first-ever Females in Tennis Camp in Devonport,” he said.

“They all did amazingly, especially given the tough weather conditions we were dealing with on the day,” he said.

“The girls got stuck in and really bought into the themes of the day, with a key focus being the drive-volley, which is at the forefront of the women’s game.”

Tennis Tasmania’s Schools Development Coordinator Alyssa Hibberd said the camp’s holistic approach saw participants form a bond that she hopes will continue to strengthen as they interact with each other throughout their respective tennis journeys.

“A great element of the camp was to see the girls connect through first highlighting their own character strengths and then sharing this with their peers,” she said.

“As females we are often quick to tell others our weaknesses.”

We want to focus on the positives, and encourage the girls to be proud of what makes them special people.”

The Devonport camp, also led by Females in Tennis National Lead Emma Shoemaker and Tennis Tasmania’s North and North West Regional Lead Phoebe Davis, is the first of two initial experiences planned in the state, with a third camp planned  for experienced players early next year.

“It was good to start in the North, and we’re looking forward to running the same thing in the South in January, before bringing it all together with an advanced statewide camp sometime in March,” Durek said.

“We really want to get more girls involved in tennis in the state, and these camps are a fantastic platform to build from; it’s about creating the links from those programs and the camps, along with the clubs and coaches.”

“Hopefully we can utilise the momentum from these experiences to continue to grow female participation and have a larger cohort of juniors coming through these types of opportunities in future years.”

Further information on the upcoming Females in Tennis Development Camp to be held in Hobart next month will be announced soon.