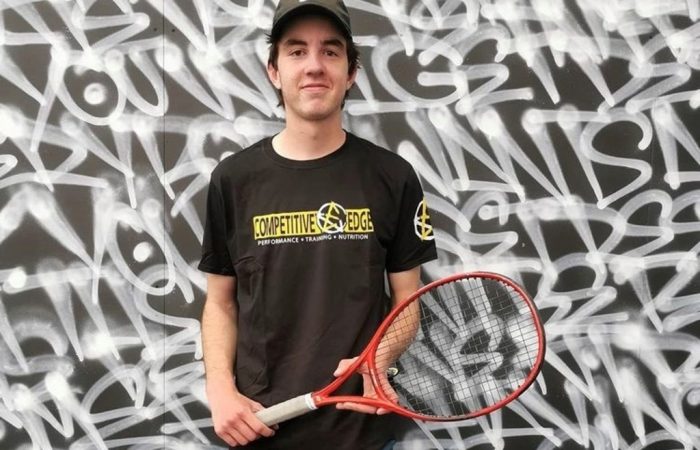 Tasmanian National Academy player Sam Whitehead will head to the United States in 2021 after accepting a scholarship to the University of Texas Rio Grande Valley.

The Launceston product will make the move in August next year, with the news coming in his final week of Year 12 exams.

For Whitehead, the scholarship is the realisation of a long-term goal which stemmed from being involved in the sport from his formative years.

“I’ve been around tennis for most of my life, as my dad used to coach,” he said.

“I loved it when I was younger and have just kept playing.”

“I’ve been wanting to go to US College for a while now, probably since grade nine or ten.”

“Over the last few months I’ve been contacting a lot of schools, and a coach from the University of Texas Rio Grande Valley kept in contact and it eventually led to an offer.”

A regular member of Tasmanian junior state teams and development squads, the 18 year old nominates competing in a number of Pizzey Cup events as personal highlights.

At the most recently-held instalment of the prestigious national schools team tennis championships in 2019, Whitehead capped off his final appearance by being named in the All Australian team alongside fellow Tasmanian Ruben McCormack.

“The team atmosphere in the Pizzey Cups was great, and I love those events where you work together,” he said.

“It’s a big reason why I wanted to pursue the college environment where the team is a focus.”

Long-term coach and mentor James Bolzonello has worked with Whitehead out of Tennis World Launceston for the best part of a decade.

“I’ve been coaching Sammy for nearly ten years, since he was eight years old,” Bolzonello said.

“We went to the National Talent Development Camp which was held at the Australian Institute of Sport when he was just nine.”

“Sam’s a very aggressive player, and has been ever since he was young.”

“There are pros and cons to that, but it’s all coming together and he’s becoming a well-rounded player.”

Bolzonello was quick to highlight the work ethic of the rising star, noting Whitehead’s regular training sessions with Launceston-based strength and conditioning professional Jamie Dash to ensure no stone is left unturned in his preparation for the College tennis experience.

“Jamie runs his business, Competitive Edge Training and Nutrition, in the gym beside us at Tennis World,” he said.

“He was a US college athlete, so he’s has the experience of working with select college conditioning programs , and that was a great opportunity for us to approach him to provide Sammy with a tailored program to complement his on-court work.”

“This has given Sammy a great base to work with before he goes away and will allow him to adapt to the demands of the college environment quickly.”

In recent years there has been a healthy number of Tasmanian players undertake US college scholarships, providing an alternative avenue to tennis development beyond a transition straight into aspiring towards a professional career.

“College has been a pathway that’s been around for players from the state for a while now,” Bolzonello said.

“Benny Barnett and Benny Cawston, to name a couple that I’ve worked with in the North, they’ve been there and for Sammy to hear about their experiences, it’s had a strong influence on him.”

“College will give him a great pathway for his development beyond competing in Tassie.”

For Whitehead, the coming months will be spent focusing on preparing and competing as he counts down the days ahead of his departure.

“I’ll focuses on playing every match-sanctioned event, from local pennants and leagues to UTR tournaments,” he said.

“I’ll also try to do some coaching and train a fair bit so that I’m ready to go.”