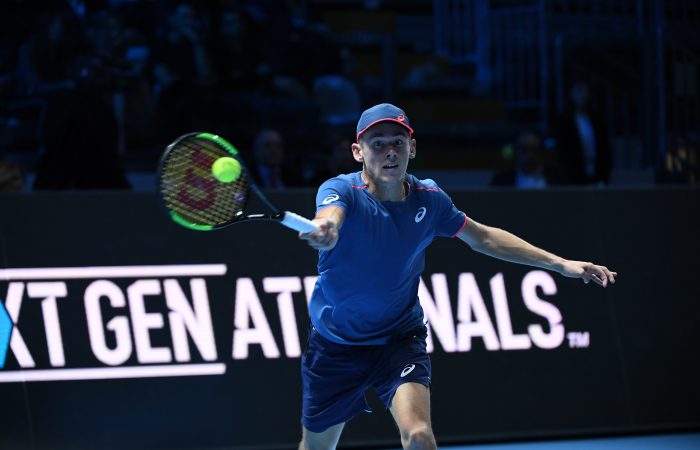 Australian teen sensation, world No.31 Alex de Minaur, will visit Hobart for the inaugural Tasmanian Festival of Tennis next month.

De Minaur will meet fans at the festival, held at the Domain Tennis Centre on Sunday 16 December from 3pm to 7pm.

“I competed in the Launceston International in 2017, but this will be my first visit to Hobart so I’m looking forward to being part of the Tasmanian Festival of Tennis,” said de Minaur.

“It is always nice to meet fans and to give back to the sport.”

The 19-year-old enjoyed a stellar rise in 2018, with highlights of his breakthrough season including reaching two ATP finals and making the third round at both Wimbledon and the US Open.

De Minaur recorded 14 wins over top 50-ranked opponents and won the ATP Tour’s Newcomer of the Year award. He is also a nominee for the prestigious Newcombe Medal – the highest individual honour in Australian tennis.

“Alex had a phenomenal season, rising from outside the top 200 to a career-high No.31. He is now Australia’s top-ranked man and has won a lot of fans with his determination and talent,” Sturgess said.

“Tasmania has a proud history of launching many young careers and Alex is a great example, scoring one of the biggest wins of his young career when he upset the top seed at the Launceston International in 2017.”

“With world-class athletes competing in the state this summer, we are hoping many Tasmanian’s are inspired to pick up a racquet and play too.

“Participation is what the Tasmanian Festival of Tennis is all about. There will be opportunities for people of all ages to play – from juniors wanting to try ANZ Tennis Hot Shots to adults looking for social play.

“The festival is free for all to attend, so we encourage everyone to get involved.”

Excitement is building for the summer, with the Hobart International to unveil an impressive player line-up next week. It is set to include a mix of familiar faces and rising stars of the women’s game.

Fans who purchase tickets to the Hobart International during November also go into the draw to win the tournament’s biggest-ever fan prize. This includes final tickets, where the winner and a guest will get treated like a player with accommodation at the player hotel, tournament transport to the venue, a pre-final lunch in the player café and get to observe post-match press conferences and champion’s photo shoot.