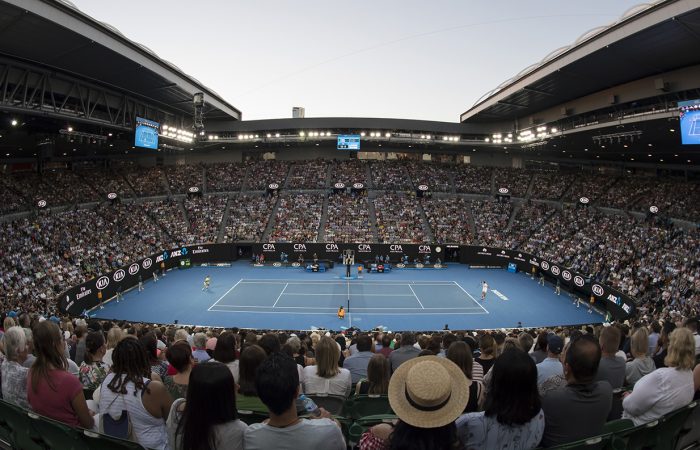 Deloraine Tennis Club has won the major prize in a Hobart International 2019 competition for Tasmanian clubs.

The 38-member club, based in the state’s north near Launceston, wins an Australian Open prize package including Rod Laver Arena tickets and flights to Melbourne.

Secretary Debbie Kearns was stoked, as well as amazed that Deloraine had placed first. She said the club would use the prize for their Christmas raffle, hoping it would help beat last year’s fundraising contribution.

All Tennis Tasmania-affiliated clubs were eligible to enter the competition, which required individuals to use a unique club code when purchasing Hobart International 2019 tickets during October. To qualify for the competition, each club needed their code to be used at least five times.

“As a small club whose members already made a significant contribution to local tennis, we plan to offer the (prize) to our members.”

Taroona Tennis Club receives a Launceston International two-day finals package, including courtside seats and hospitality, for the third prize. They plan to use the prize as part of an auction to raise funds for the club.

Chris Wilson of Blackmans Bay won the individual prize of a complimentary ticket upgrade, including hospitality and a behind-the-scenes tour.

“Thank you very much for this exciting news,” Wilson said. “We have been regular viewers of this tournament for several years, so this prize will be greatly appreciated.”

“We are proud to support the clubs and individuals who support the Hobart International. It is an important event for our state. Not only does it promote our sport on the world stage, it is also inspiring for Tasmanian’s to be able to watch some of the world’s best players compete here,” Sturgess said.

“Enhancing the fan experience and making the tournament more family-friendly than ever is a focus for us in 2019, so we encourage everyone to book their tickets so they don’t miss out on being part of what promises to be an exciting event.”

The Hobart International is the state’s biggest tennis tournament, attracting many of the world’s best female players. Belgian Elise Mertens won the 2018 edition, the start of a stellar season that saw the 22-year-old reach the Australian Open semifinals and achieve a career-high ranking of No.13.

Reigning US Open champion and world No.5 Naomi Osaka and Belarusian Aryna Sabalenka, now ranked No.11, were also part of the 2018 field.

The 2019 field will be announced later this month.

Fans looking to purchase tickets to the 5-12 January event still have a chance to win prizes, with the launch of an exciting ‘Win a Player Experience’ promotion last week.

> Find out more about ‘Win a Player Experience’

One lucky fan who purchases a ticket during November will win a VIP finals package, including the chance to stay at the official player hotel, use player transport to attend the final and a meet-and-greet with the singles champion.