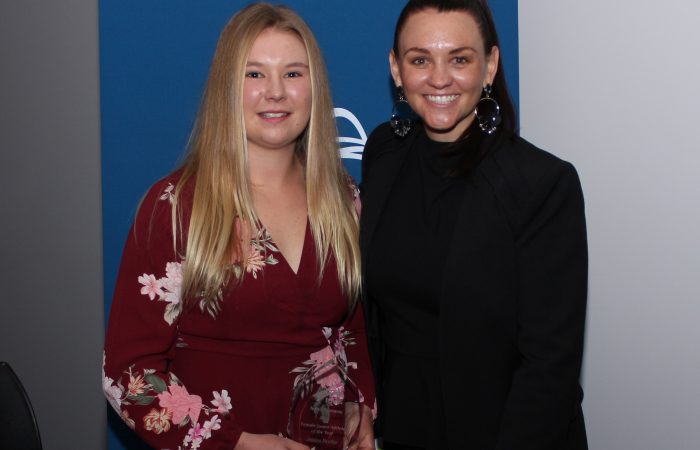 After being crowned Tasmania’s 2018 Female Junior Athlete of the Year, Jessica Fowler is more determined than ever to chase her tennis dreams.

“It is an honour,” Fowler said, dedicating her award to her family for their ongoing support.

It is the second time the 18-year-old from the Lindisfarne Memorial Tennis Club has won the award, also receiving the accolade in 2016.

Fowler’s national ranking is currently No.65 – making her the state’s highest-ranked female player. A top 100-breakthrough followed impressive results at Australian Money Tournaments (AMTs) in the past 12 months, winning titles in both singles and doubles.

Her focus is now replicating this form at higher-level Australian Pro Tour events, where she aims to continue to improve her ranking and compete against the world’s best this summer.

“I’m looking forward to giving those a good crack and see how I go,” she said.

“I’m not at school anymore, so this next year is my time to really go after my dreams.”

Fowler is also a trainee coach at the Hobart Tennis Academy and Lindisfarne Memorial Tennis Club, where her positive attitude makes her a great mentor for her fellow junior athletes.

Eliane Fader and Charlotte Ingram were finalists for the Female Junior Athlete of the Year award.

Ben Cawston, a National Academy athlete at the Domain Tennis Centre, won the Male Junior Athlete of the Year award.

The 18-year-old Cawston, who was unable to attend the award’s presentation at the Burnie Tennis Club, won the prestigious Pardey Shield in 2018 and recently received a tennis scholarship to attend the College of Charleston in South Carolina next year.

Ruben McCormack, Sam Edgar and Sam Whitehead were finalists in the Male Junior Athlete of the Year category.