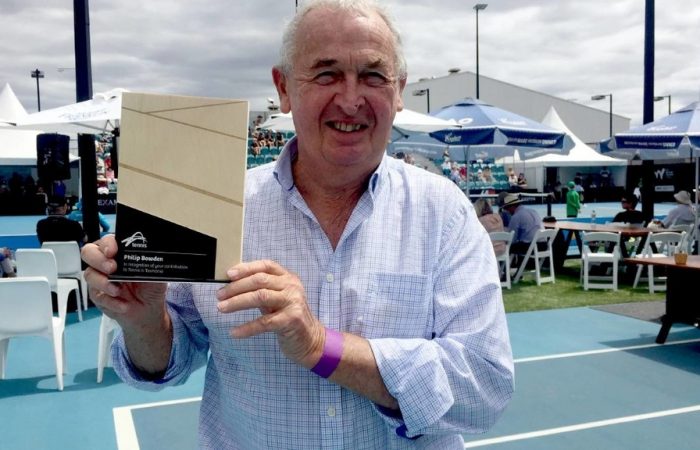 Tennis Tasmania President and Chairman of the Board Phil Bowden retired in late 2019 after 23 years of service on the board.

Having received an award from Tennis Australia at the Australian Open in January, Tennis Tasmania was proud to acknowledge Phil’s body of work in front of a strong crowd prior to the final of the Launceston International in February.

Phil was presented with a trophy made from Huon Pine, with an inscription reading:

Your dedication, passion, commitment and tenure will be remembered amongst past, present and future Tennis Tasmania board and staff. Your legacy will long remain with the evolution of the Launceston Regional Tennis Centre.

With five years as Vice President and six as President, Phil leaves behind a strong legacy, with family originally drawing him into the sport.

“I was lured into it by my wife, she was a very good player, an A-grade player who played for the state,” Bowden said.

“We had children and she was keen for them to play, so that involved me going along with them and then I joined the junior committee and eventually became President of that, and then away I went.”

After moving from Hobart to Launceston, Bowden first became a member of the Launceston Indoor Sports Arena, where his three daughters played before all going on to represent Tasmania.

Bowden was quick to highlight the ‘massive’ changes he has seen in his time in tennis as the sport has continued to grow in the state.

“The board was a very hands-on board when I first joined, we did everything,” he said.

“The Tennis Tasmania staff was probably one person, and so the board were involved in operational matters.”

“Over time that has changed completely, and that is very much for the better.”

“My role has changed dramatically as well, and we’re now involved in governance and strategic planning and we leave all the hands-on work to the Tennis Tasmania staff.”

When asked on how he’d like to be remembered as an administrator, Bowden preferred to speak of his colleagues and their united focus instead.

“In my time I’ve tried to stand up for what I’ve believed is right,” he said.

“I had a pretty good run (on the board) and I’ve always had terrific support from officers while vice-president and president, and great presidents when I first joined.”

“The general managers, or the CEO’s of the state, have been great.”

Bowden spoke of his pride in Tasmania hosting international tournaments in all three regions of the state in recent years (Hobart, Launceston and Burnie), and of his hope for a clubhouse to be built at the Regional Tennis Centre in Launceston after years of working towards the goal.

He hopes others will continue to become involved in tennis as it continues to grow and evolve on a state and national level.

“I would encourage anyone to put their hand up when an opportunity arises to start in administration, or in any aspect of tennis.”

“You get a lot of rewards and a lot of enjoyment out of it.”

Heidi Radcliffe has also been recently elected as a Director of the Tennis Tasmania Board. 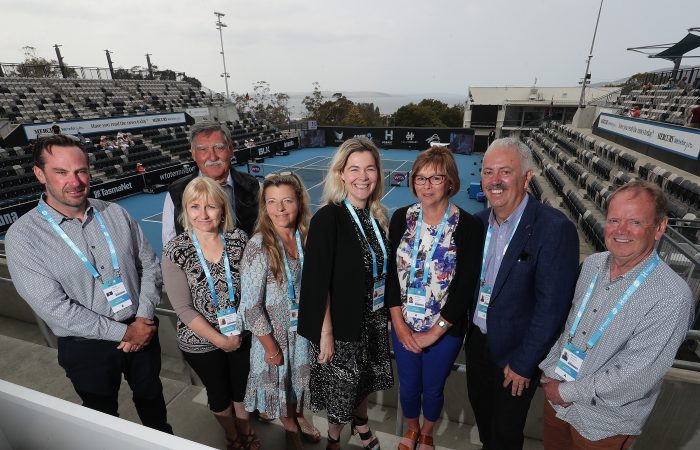 The tennis community of Tasmania is better off for the volunteer service provided by former Tennis Tasmania President, Phil Bowden.

His support of tennis, over more than 20 years, has been extensive, and his 23 years of service as an administrator on the board of a Tennis Tasmania is amazing.

His contribution leaves a great legacy and is to be commended.

Phil is the person who got me re-engaged with the game that I love.

Being appointed as vice-president is a huge opportunity for me to give back to the game, and Phil is to be credited for who he has managed to bring onto the board, so he leaves with tennis in the state in a strong position.

I have a commitment to wanting to grow the game across the state.

There are a lot of significant opportunities in each of the regions, so with the new Open Court Session focusing on participation, we have some real opportunities to grow the game.