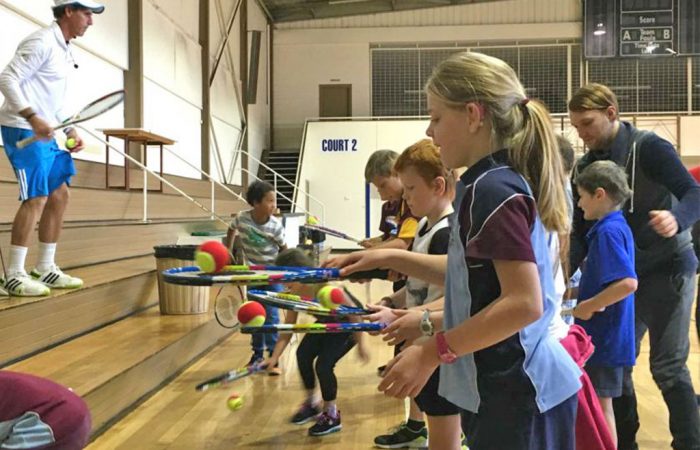 ABC News has reported on the participation of deaf and hearing-impaired children in Tasmania. See the article (by ABC’s Ted O’Connor) and video below, showing a clinic hosted by Dickson Tennis.

There are concerns deaf and hearing-impaired children in Tasmania are under-participating in sport because their disability is not catered for.

Deaf Sports Australia is trying to address the issue with annual clinics held in Tasmania for children with hearing difficulties.

On Wednesday (17 May) at Moonah Sports Stadium in Hobart, 20 children honed their skills at basketball, AFL, tennis, and netball.

Irena Farinacci, who played basketball for Australia at the Deaflympics, acts as a sporting role model for young hearing-impaired people. She said sporting clubs could do more to make it easier for those hearing-impaired to participate. “We’ve had too many deaf and hard of hearing kids find it very hard to join the locals sports club,” she said. “They don’t feel confident in participating because they are worried about understanding what’s going on.”

Clinics important for children to connect

Ms Farinacci said some participants in the clinics often rarely meet others their age who wear hearing aids. “I think it’s really important, because many deaf and hard-hearing kids are pretty much enrolled in mainstream schools,” she said.

It was a key reason why Tony and Lisa Voglino’s two sons were enrolled in the clinic. “It’s a good opportunity for them to recognise that there are other children out there that are hearing impaired, with a cochlear implant or with hearing aids,” Ms Voglino said.

Tyler Voglino, 8, said with the help of an interpreter that his favourite sport was football.

Samuel Stuart, 10, said he liked meeting others with cochlear implants. “Because they are no different,” he said.

Deaf Sports Australia hopes the clinics will also address above average rates of obesity among hearing impaired children, which was blamed on a lack of participation in sport.

Tasdeaf director Alarna Thomas said there were limited opportunities in Tasmania for hearing impaired children to socialise. “Deafness being a minority disability has always had its challenges,” she said. “Having opportunities like this is really critical in terms of students self-identity.”