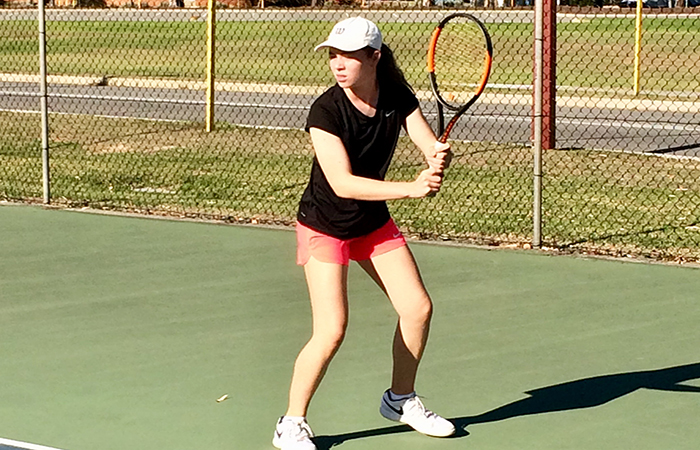 Talia Gibson began playing tennis like most other kids, her Mum took her to a tennis lesson when she was five years old. However most other kids don’t go on to hold a number one ranking in Western Australia for their birth year for a period of five years.

At age 13 Talia is humble and grounded despite many impressive achievements at such a young age. At the recent 14/U Australian Grasscourt Nationals held in Adelaide from 9-14 April, Talia was a singles semi-finalist. She was also in the doubles final with partner Jessica-Jade Haylo (Qld) where they were leading convincingly until the match was cancelled due to bad weather.

Her first international tennis experience came in 2017 when Talia was selected on the Tennis Australia 13th Birth Year tour that went to Germany for four weeks.

“My favourite part was the international touring experience and playing on clay” said Talia.

Talia’s goal for 2018 is to develop versatility in her game. When asked how the Tennis West initiatives have helped develop her as an athlete, Talia said it was hard to narrow down to just one thing.

“Whether it’s been participation in Super 10s, State Team selection, wildcard application endorsement or match play training, the pathway has helped my development and provided me with opportunities I might not have had otherwise.”

While Talia is taking 2018 one tournament at a time, when asked where she sees herself in ten years she simply says “holding the Australian Open trophy”.

Get to know more about WA rising star Talia Gibson

How were you introduced to tennis? My Mum took me to a tennis lesson when I was 5 years old

Greatest achievement? Selection on the Tennis Australia International 13th Birth Year Tour in 2017, National Grass court finalist a year out of my age group, winning a singles and doubles AMT at age 13.

If you could have any super power what would it be? To fly

Hobbies: Going to the beach, tennis.