John Millman has conceded only two games to advance to the second round at an ATP 250 tournament in Russia. 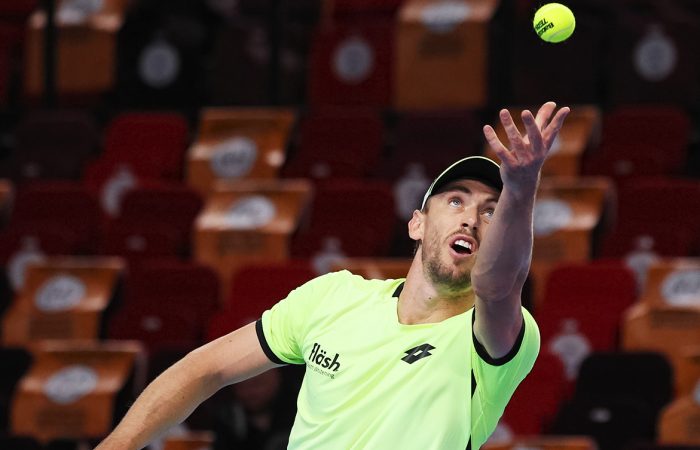 John Millman has stormed into the second round at an ATP 250 tournament in St. Petersburg, needing only 65 minutes to post a 6-1 6-1 win against Israeli wildcard Yshai Oliel.

The world No.57-ranked Australian lost only 10 points in total on his service games in the dominant victory.

It continues an impressive run of form for 32-year-old Millman, who has won 8 of his past 12 matches and advanced to four tour-level quarterfinals since representing Australia at the Tokyo Olympics in July.

To reach a fifth quarterfinal, Millman faces a tough test in the second round. He plays fourth-seeded Russian Aslan Karatsev, who enjoyed a title-winning run at the Kremlin Cup last week.

The 28-year-old Karatsev did not lose a set at the Moscow tournament and was rewarded with a top-20 debut.

Alex de Minaur faces a big challenge in the second round at an ATP 500 tournament in Vienna, with the 22-year-old Australian playing world No.4 Alexander Zverev for a place in the quarterfinals.

Zverev has won four of their five previous tour-level meetings. However, De Minaur won their most recent clash in a three-set battle at the ATP Cup at Brisbane in January 2020.

Ajla Tomljanovic is hoping to advance to her second quarterfinal of the season this week at the Transylvania Open in Romania.

The 28-year-old Australian plays local wildcard Jaqueline Cristian in the second round at the WTA 250 tournament.

It will be world No.43 Tomljanovic’s first career meeting with the 23-year-old Romanian, who is currently ranked at a career-high No.105.