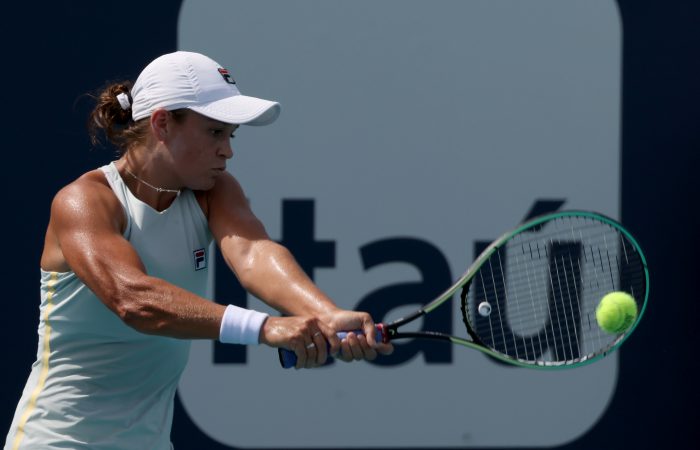 Ash Barty is through to the semifinals at the Miami Open.

The top seed recorded a 6-4 6-7(5) 6-3 victory against world No.8 Aryna Sabalenka in the quarterfinals today.

It is Barty’s first top-10 victory since defeating Petra Kvitova in the Australian Open 2020 quarterfinals.

Barty did not lose serve in the match, saving all seven break points she faced. Similar to yesterday’s fourth-round win against former world No.1 Victoria Azarenka, Barty also finished the match strongly. She claimed the final 12 points to secure a hard-fought victory.

“It was a brilliant match today, certainly the best level I’ve played in a long time,” Barty said. “Aryna really made me bring out my best.”

Barty hit 28 winners in the two-hour and 16-minute battle to record a 10th successive win in Miami. It  propels the 2019 champion into the semifinals, where she will face fifth seed Elina Svitolina.

Svitolina boasts a 5-1 winning record against Barty, however the Australian won their most recent meeting in the championship match at the WTA Finals in 2019.

Today’s victory also boosts Barty’s chances of retaining her world No.1 ranking. The 24-year-old Australian is guaranteed to remain as world No.1 if she progresses to the final. If she loses in the semifinals, Naomi Osaka needs to win the Miami title to overtake her atop of the WTA Tour rankings.

Saville’s exit means Barty is the last remaining Aussie across all Miami draws.