Qualifier Priscilla Hon notches an impressive three-set victory over countrywoman Alja Tomljanovic for her fourth straight win at the Korea Open in Seoul. 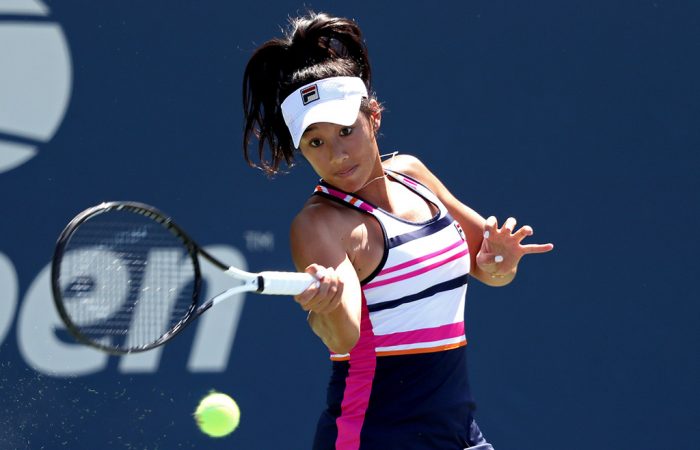 Priscilla Hon on Thursday upstaged fifth seed Ajla Tomljanovic in three sets to advance to the quarterfinals of the Korea Open in Seoul.

The qualifier beat her fellow Australian 6-3 5-7 6-1 to reach the last eight in the South Korean capital for the second time in three years.

Tomljanovic, a finalist at this tournament last year, finished the match with 11 double faults, while Hon produced eight aces among 36 winners.

“Ajla’s obviously a big hitter and I knew I couldn’t back off at all. If I did that, she would be all over me,” Hon said.

“I had to stick to big targets and go for my shots. There were a few points here and there where I would kind of be a bit more tentative and she was all over it. So for me it was (about) just to keep going for every shot.

“A think a few years ago playing another Aussie would have phased me a lot more than it did today, so I think I’m growing in that aspect. I kind of knew what to expect and I’m glad I had a good game plan to play her.”

Hon next plays No.3 seed Karolina Muchova, whom she beat in the first round of this event in 2017. She is now 11-2 lifetime in Seoul after coming through qualifying to reach the main draw three years’ running.

“I feel very comfortable here … I think it suits my game a lot and, yeah, I’m loving it here so far and hopefully I don’t need to leave any time soon,” she said.

In the first ever meeting between the two players, Hon flew out of the blocks, establishing a 5-1 lead before Tomljanovic closed the gap slightly.

Displaying superior power and a wider variety of shots, Hon broke Tomljanovic in both the third and fifth games of the second set to twice lead by a set and a break.

Yet Tomljanovic, the world No.42 and a semifinalist last week in Zhengzhou, steadied as Hon began to misfire; she held a break point for a 5-3 lead before Hon escaped to level scores at 4-4.

The Australian No.2 had begun to turn rallies in her favour, and, as the competitive quality of the match reached its peak, she fought off a break point in the 11th game before breaking her younger opponent to send the match to a third.

Despite having little momentum entering the final set, Hon wrested control of it.

“Honestly, when I lost the second, I was surprisingly relaxed,” Hon reflected.

“I didn’t take my chance obviously. She served well when she needed it and I didn’t do anything massively wrong. So I was like, I can’t do much about that, so let’s just focus on the next set.”

Determined to be the aggressor, she overwhelmed Tomljanovic with the quality of her returns, her heavy forehand and frequent swinging volleys. Points, then games, began to rapidly click over.

Hon ripped three forehand winners in the third game to break for a 2-1 lead, fired another forehand winner to stretch that margin to 5-1, and closed the match with 12 third-set winners.

“I think I’m more sure about my game style. I don’t really back away from what I know works for me,” Hon said.

“I don’t feel I’m playing the best tennis of my life, but I do feel a lot more a clear, so that’s probably why (I’m achieving this success).”