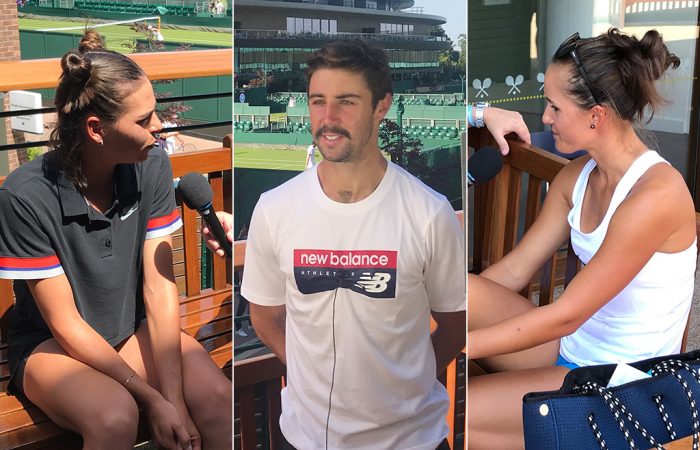 The Australian contingent continue to arrive at the All England Club, ready for the 2019 Wimbledon Championships.

There will be 13 Aussies competing across the men’s and women’s singles events this year, with Sam Stosur the latest to chat to the Australian media on Sunday about her prospects.

Here is how the grass-court form guide looks for the Australians heading into next fortnight’s tournament.

Rank/seed: 1/1
R1 opponent: Zheng Saisai (CHN, #43)
Going forward: Svetlana Kuznetsova in R2, Garbine Muguruza in R3
2019 grass W/L: 5-0
Best result: Won Birmingham
Thoughts: “I’m feeling good. I’m feeling ready. We’re going about our preparations the way that we want, the way that we need to go about them and in a couple of days’ time, we’ll be ready to go. I would have loved to have played every single week, but plans change, things change. We had to listen to my body, first and foremost, (and not play Eastbourne) to give myself the best chance to be fresh for Wimbledon. Even though I played only one tournament, instantly I felt really good. I felt better and better every match, I felt more comfortable each match. So now we come here and get ready for my first match on Tuesday. We’re here we’re ready, we’re preparing. That’s all you can ask for.”

Rank/seed: 29/25
R1 opponent: Marco Cecchinato (ITA, #40)
Going forward: No.8 seed Nishikori looms in R3
2019 grass W/L: 1-2
Best result: QF ‘s-Hertogenbosch
Thoughts: “Rematch from last year. It’s gonna be tough, because obviously we know each other and he (Cecchinato is) going to come guns blazing so it’s going to be a very tough match, but I feel like I’m playing very well, I’m moving well, enjoying myself out there. This is always special to come back here. I had a great run last year. Body’s feeling 100 per cent, mind is 100 per cent and I’m just happy to be here. It is (a relief to get the body right). It’s been feeling really well the last couple of weeks so hopefully I can go out here and just play the way I want to play and enjoy just being out here on the grass.”

Rank/seed: 43/unseeded
R1 opponent: Jordan Thompson (#45, AUS)
Going forward: No.3 seed Rafael Nadal in R2
2019 grass W/L: 1-2
Best result: R2 Queen’s Club
Thoughts: “It’s been good [preparation]. Obviously didn’t get too many matches in Stuttgart, but I lost to the eventual winner,” Kyrgios told atptour.com. “Played a bit of dubs last week and got here and had a hit. Have been feeling good. This is probably my favourite time of the year. Obviously the Aussie summer is pretty good, but just being in London when the weather is like this is pretty hard to beat. Just playing on grass every day, it’s a lot of fun.”

Rank/seed: 45/unseeded
R1 opponent: Nick Kyrgios (AUS, #43)
Going forward: No.3 seed Rafael Nadal in R2
2019 grass W/L: 6-2
Best result: Final ‘s-Hertogenbosch
Thoughts: “I don’t want to let him (Kyrgios) get past me. But I’ve got a job on my hands. He’s got an incredible serve – it’s very unreadable. I’ve got to do everything in my power to try and get it back in play. And then I’ve got to look after my own serve, so it’s gonna be a big task. (My grass-court season has) been pretty good. Made a final in my first event, wasn’t too far from winning that first set and then anything can happen. But it wasn’t to be. And then this week in Turkey, semifinal, lost 7-6 in the third, didn’t drop serve all week, so I was within a whisker of making another final. So yeah, pretty happy with the grass-court form.”

Rank/seed: 49/unseeded
R1 opponent: No.29 seed Daria Kasatkina (RUS)
Going forward: Victoria Azarenka in R2
2019 grass W/L: 1-3
Best result: R2 Mallorca*
Thoughts: “I’m feeling good. Maybe wish I’d had maybe a few more matches on the grass. At the same time, any slam is a different week than any other week. It’s all about your mindset and how you approach it. I’m hitting the ball well. I’ve had a couple of good practice sessions so I’m actually excited to kick it off on Monday. I think it’s a good (first-round) match for me. She’s seeded so she’s definitely a good player. I think at this point anyone who would have gotten in the draw would have been a really tough match. But I think match-up wise, I don’t mind it and yeah, I think I’ll get my chance to play my game and I’m really kind of looking forward to it.”

Rank/seed: 58/unseeded
R1 opponent: Hugo Dellien (BOL, #93)
Going forward: 31st seed Djere in R2, No.5 seed Thiem in R3
2019 grass W/L: 0-3
Best result: Three-set loss to Verdasco, R1 Eastbourne
Thoughts: “It’s been tough to be honest. I feel as if I haven’t been too far away. I’m not one to lament on a couple of misfortunes but I think the draws (in my grasscourt events) have been pretty rough. But every week, I approach it the same and I see every match as an opportunity and definitely this week there’s a big opportunity there for me and I’m aware of that. I’m very hopeful that I can find a little bit of momentum early and get that confidence going. Definitely looking to stamp my authority early and focus on the good things, not focus on the bad things. Give myself a bit of positive reinforcement and be ready to go.”

Rank/seed: 78/unseeded
R1 opponent: No.8 seed Elina Svitolina (UKR)
Going forward: No.31 seed Sakkari in R3
2019 grass W/L: 2-2
Best result: R2 Eastbourne
Thoughts: “I haven’t had the best year. I’ve had a few niggles and my feet are not being kind to me. I have plantar fasciitis and achilles tendinitis. I think I’m managing it better. It’s a bit annoying not having the workload as high as I used to but this is just a cost of getting my feet better. I just need to be patient and deal with it. I can play with it. There are some days when I don’t feel it and I’m feeling good. There are some days when I’m struggling with a bit but I’m learning to deal with it so it’s getting there. I know (Svitolina) hasn’t had the best year so far and she’s also struggling with a few injuries. I think it’s gonna be a mental battle. Already I spoke to Dave (Taylor) my coach about playing her and I just need to set my mind to being really tough and just competing well.”

Rank/seed: 85/unseeded
R1 opponent: No.27 seed Sofia Kenin
Going forward: Yastremka or Giorgi in R2, No.2 seed Osaka in R3
2019 grass W/L: 2-2*
Best result: Final round of Birmingham qualifying*
Thoughts: “I’m really excited. Obviously I have a lot of respect for (Kenin). She had a really good claycourt season and also has been doing very well on the grass, so I know she’s going to be dangerous. But at the same time I’m feeling really good on the practice court and can’t wait to get out there and try to compare against her. (This is my first time at Wimbledon and) it’s been unreal. I did not expect this at the start of the year so everything is kind of a bonus. Walking around the grounds, seeing all the names and the pictures behind the whole tournament, it’s been an amazing experience.”

*Reached R2 of Nottingham, but her two matches were played on indoor hardcourt due to persistent rain

Rank/seed: 91/unseeded
R1 opponent: No.24 seed Diego Schwartzman (ARG)
Going forward: No.14 seed Borna Coric in R3
2019 grass W/L: 2-4
Best result: QF Surbiton Challenger
Thoughts: “On paper it’s not as hard as say last year (against then ninth-ranked Goffin), where I won more, and it’s probably on paper harder than other years, where I’ve lost. There’s probably two or three guys in the draw who are really, really good at the moment and really hard to beat – the guy I’m playing is not one of them. So everyone else is kind of fair game, in a way. At the same time of course he’s a quality player. (I’m doing) better now I’m at Wimbledon. There’s something special about this place, coming here makes you feel happy, makes you hit the ball well, and play good. For me on grass it feels a little bit like this.”

Rank/seed: 99/qualifier
R1 opponent: Pablo Carreno Busta (ESP, #59)
Going forward: No.11 seed Daniil Medvedev in R2
2019 grass W/L: 5-2
Best result: Qualified for Wimbledon, Stuttgart
Thoughts: “It was a great achievement for me, qualifying for Wimbledon. It was a dream come true. I’ve always wanted to play in the main event since I was a kid. Just driving past these courts when I was at qualies, when I was still playing qualies, it definitely gave me that extra motivation and to finally to step inside the gates, it was really a great experience. I think (I have) a pretty good draw for Wimbledon, but I’ll just take it one match at a time, focus on my first round definitely and I think I’ve got a good chance and definitely I’ll still be focused and focused on my game.”

Rank/seed: 132/unseeded
R1 opponent: No.30 seed Carla Suarez Navarro
Going forward: Maria Sharapova in R2
2019 grass W/L: 4-2
Best result: R2 Eastbourne (after qualifying)
Thoughts: “”I am (happy with my form coming into Wimbledon), yeah. Mallorca and Eastbourne, I’ve played six singles matches and really pleased, especially with the way I played in Eastbourne last week. I’m really happy with how I’m striking the ball and my level of tennis, so now I’ve got two more days just to keep practising and I guess focus more now on Carla (Suarez Navarro), knowing who my opponent is, and yeah, I’m looking forward to my first round and feel like I’m ready for it.”

Rank/seed: 212/qualifier
R1 opponent: Taylor Townsend
Going forward: No.4 seed Kiki Bertens in R2
2019 grass W/L: 3-2
Best result: Qualified for Wimbledon main draw
Thoughts: “I haven’t actually hit yet but I’m having my first hit at 3pm today. I remember that the courts are much lower (bouncing) here and much quicker (than Roehampton), so I’m definitely prepared for that. And I’m actually looking forward to that, I think it’s gonna suit my game probably more … let’s hope so (laughter). I played against (Townsend) twice and both times we had really long matches. Once I think I won 7-6 in the third and another one I think she won like 6-4 in the third. So it’s definitely gonna be a good match. It’s not a bad draw for first-round Grand Slam. I’m just gonna try my best and see where it takes me.”